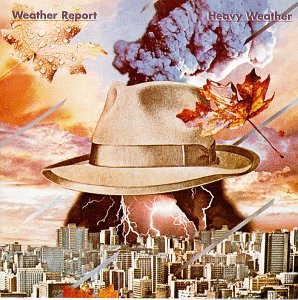 Listen to this track by jazz-rock innovators with a rotating line-up Weather Report. It’s “Birdland”, a bona fide hit single as taken from their 1977 album Heavy Weather. The record was a smash success, selling loads while also impressing the reviewers at Downbeat at the same time.

In particular, the album showed off the dynamics of the band and where they’d pushed the boundaries of jazz as a form, coupling it with many strains of music that included rock, funk, and electronic music. This is perhaps a reflection of the group’s leadership under keyboardist Joe Zawinul and his “partner in crime” saxophonist Wayne Shorter. Both men had come up in other bands in the sixties under Cannonball Adderley and Miles Davis respectively, with each of those being musicians who also sought to escape the rigidity of jazz as a form in order to put across musical visions using a wider palette. This certainly set the stage for Zawinul and Shorter to do the same.

Here on this song and on the rest of the record, this is evident. But it’s not just about redefining the boundaries of jazz in terms of texture and style. It’s also about form, with a specific element for which jazz is known largely left out of the equation.  END_OF_DOCUMENT_TOKEN_TO_BE_REPLACED