Here’s a clip of Canadian singer-songwriter Bruce Cockburn playing a version of his 1986 song “World of Wonders” with Malian master of the kora, Toumani Diabate. 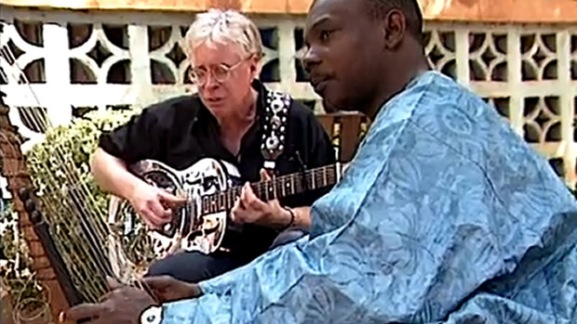 The clip is taken from the documentary River of Sand, which is narrated by Cockburn and is concerned with the environmental issue of the expanding desert, and the efforts of the people of Mali to counteract it. Along the way, we get to know the people and their culture, particularly their music and key proponents of it, like Diabate and guitarist Ali Farka Toure.

While in Mali filming the documentary, Cockburn met with a number of musicians with whom he would jam informally, and who would eventually find their way onto his recording Breakfast In New Orleans, Dinner In Timbuktu

, as well as later recordings. Toumani Diabate was one such luminary, a musician with a growing worldwide reputation for his dexterity on the kora, a 21-stringed instrument made from a gourd and animal skins.

I really love this version of the Cockburn song, which on the original album by the same name, World of Wonders

, is a bit dated by 80s production values. Here, it’s organic and sort of ghostly, largely due to Diabate’s contribution. The sound of the kora is something of a cross between a harp and a mandolin to my ears – delicate, yet grand too. It suits the song, which is about the beauty found in a world that is also marked by oppression and unjustice. On the African continent, there are striking examples of both, which makes the playing of this song quite a potent choice.

For more information about Mali and attempts to irrigate the desert, visit Oxfam.