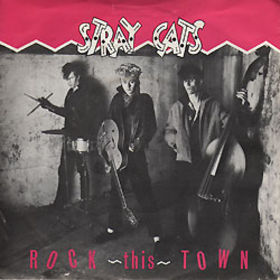 Listen to this track by Atlantic criss-crossing  rockabilly revivalist trio The Stray Cats. It’s “Rock This Town”, their 1981 single as taken off of their debut record The Stray Cats. It would appear again the next year on the US-released Built For Speed album, which EMI released in North America on the strength of that earlier UK record.

The band was from Long island, forming on the New York scene playing both Max’s Kansas City and CBGB, with those scenes being breeding grounds for all kinds of “back to basics” approaches, even if the Stray Cats went back further than most. It was the enduring Ted scene in Britain that lured them across the pond, where they would eventually record their initial two albums, and this single with Rockpile’s Dave Edmunds as producer, himself known for his love of the Sun Records sound.

The single eventually hit top ten in the US and here in Canada, too. But how? END_OF_DOCUMENT_TOKEN_TO_BE_REPLACED