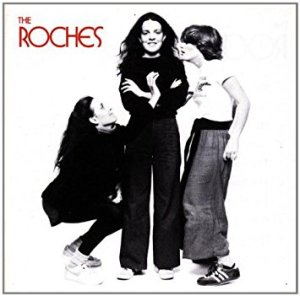 Listen to this track by sisterly New Jersey vocal folk trio The Roches. It’s “Runs In The Family”, a cut off of their 1979 eponymous debut album The Roches. The group was made up of the three Roche sisters, those being Maggie, Terre, and Suzzy, hailing from Park Ridge New Jersey from a solidly Irish-American background.

The Roches’ sound isn’t the genteel and polite one that we might expect from folk-singing sisters. There is a distinct edge to it, with three singers who don’t stay in their lanes even as they mesh their voices, and with those voices marked by idiosyncrasies instead of by standard purity of tone. And talk about unexpected musical combinations. King Crimson-honcho and prog-rock prime mover Robert Fripp not only played guitar on the record, he also produced it.

Even the material undercuts what we expect of a folk tune. This is no fey tale that tells a story of times past. This is decidedly contemporary, concerning itself with an important question that very few of us can honestly answer; why do we make the choices we make and in some cases, do we even have a choice at all? END_OF_DOCUMENT_TOKEN_TO_BE_REPLACED