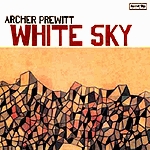 Listen to this song by The Coctails and The Sea & Cake contributor, sometime comic book colourist, and solo artist Archer Prewitt.  It’s “Raise On High” as taken from his 1999 record White Sky, a collection of deliberately and intricately autumnal songs that evoke emotional colours, even as Prewitt’s work as a graphic artist deals in actual colours.

Some of the most interesting artists are those who work in two or more fields, with one field feeding into another.  This is certainly true of Archer Prewitt, a guitarist and songwriter for two cult bands, in his own solo career, and a contributing graphic artist in comics, too.  A former member of the Coctails, a group which explored lounge-kitch long before it was fashionable among other styles, and a primary mover in post-rock outfit The Sea & Cake, Prewitt knows a thing or two about the sonic colour pallette  and the importance of atmosphere and texture.

It’s hard not to think that this comes from his instincts as a visual artist. Perhaps it’s the other way around.  Or maybe its more like a mobius strip, with one discipline rolling back onto the other and back again.

The two worlds that Prewitt inhabits collide in this startlingly gorgeous tune that seems to suggest spiritual ecstasy, bolstered by an arrangement that the word ‘lush’ doesn’t quite cover.  The mixture of the insistent jangly guitar riff, which starts the song and turns out to be on the off-beat once the other instruments come in (one of my favourite musical conventions, that!), with strings, drums, mallet percusion, and low horns creating a delicious sonic contrast.  And that outro; with the strings swelling, and with the cascading keyboards and clarinet creating an otherworldly atmosphere – pure magic!

Even if Prewitt is an American, British singer-songwriter baroque-folk like Nick Drake (particularly Drake’s Bryter Layter) and fey British guitar pop like the Lilac Time seem to be the musical equivalents here.  And much like the rest of the record, the song evokes one of those partly-sunny days, with a layer of cloud softening the sun into a pale disc, and rendering a gentle light that filters down with a peaceful kind of melancholy.

The approach here is about evoking feelings rather than conveying a message or a story.   This is music that places an emphasis on tone, and on timbre, rather than on obvious pop hooks.  Yet, this song, and others Prewitt’s done, are melodic enough to keep the moods and feelings constant.  This is the musical equivalent of impressionist painting rather than straight-ahead songwriting, an approach which can be expected from an artist otherwise working in a visual medium.

For more information about Archer Prewitt’s work in graphic novels, check out his Sof’ Boy comics.