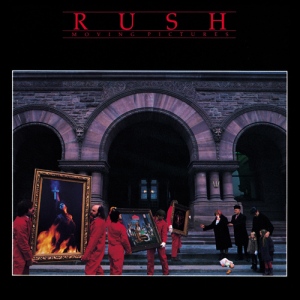 Listen to this track by hard rock prog trio hailing from Willowdale Ontario of all places (just north of Toronto for you out of towners …) Rush. It’s “Red Barchetta”, a cut off of their 1981 landmark album Moving Pictures. That album kicked off the decade for them as a new-wave influenced, although still rock-oriented unit and with this song being a stalwart fan favourite and live number, often introduced as “a song about a car”, which it is. But, there’s more to it than that.

This song is set an era when the ominous “Motor Law” makes muscle cars and Italian sports cars illegal, enforced by gleaming alloy air cars roving the roads in search of joy-riding perpetrators. The intricacies of this aren’t really outlined, and it probably doesn’t matter. If you were a teenager in 1981, you’ll know why. How many muscle car-driving Rush fans were there at that time? Too numerous to count. For all of the time-shifting math rock and seamless and staggering musicianship for which the band is known, they knew their audience.

But, what else influenced the writing of this song? END_OF_DOCUMENT_TOKEN_TO_BE_REPLACED

.  Of any North American band who ever tried to match their European progressive rock counterparts for complexity and lyrical conception, it is Rush.   This track is a part of their middle-phase, when their high concept material and intricate playing began to define them.

The first phase had them as skilled Zeppelinists, pumping out hard blues-rock much like Zep, but not really nailing down a voice of their own.   By 1976, with their album 2112, and with the addition of a new drummer and lyricist in Neil Peart, their musical ambitions expanded with more rhythmic complexity, longer instrumental passages, conceptual lyrics, and approach to presenting their songs as a part of a greater whole.   And so was the second phase of the band’s career begun, with a slight shift from Led Zeppelin to something more akin to Yes with bigger cojones, and just as the prog rock was beginning to wane in Europe.  I think the success of the group lay in the fact that they built on their Zep-head roots, while adding something new to the prog landscape.

Sure, “Xanadu” is complex, and dependent upon source material having to do with the English Romantic poetry of Coleridge more than with the riffage of Chuck Berry.  But, it doesn’t forget to rock, as well as build a story.  So, the stoners bought in, but so did the musos and sci-fi geeks.  That’s quite an achievement for a little band formed in Willowdale Ontario, just north of Toronto.

Ironically, the single taken from this same record is “Closer to the Heart”, marked with the same lofty lyrics as anything else on the album, and looked upon as something of a signature tune even today.  It was certainly a radio staple.  And perhaps it was the success of CTTH that the band began their third phase, which was about radio-friendly singles with only a hint of their progressive rock leanings, as opposed to the unabashed, arguably long-winded ‘prog’ as found on “Xanadu”.

As such, they rode out the backlash against big, generic corporate rock shows by continuing to pursue the three piece hard rock of their roots, matched with an embrace of technology – keyboards, MIDI technology – that sustained them into the 1980s.  By the next decade of course their appeal was cemented.  Today, they’re an institution, true prog/hard rock survivalists who have gained pan-generational appeal; a rare thing indeed.

For more information and music, check out the Rush MySpace page.

And of course, check out the official Rush website for more fan goodness, tour dates, and more.