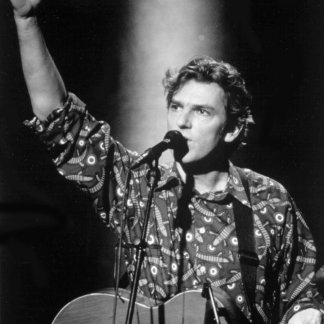 Listen to this track by surrealist pop musician, singer-songwriter and pretty handy guitarist too, Robyn Hitchcock. It’s his 1998 rendition of his song “Glass Hotel”, one of the many he performed for the Jonathan Demme film Storefront Hitchcock. Where another of Demme’s high-profile concert films, Stop Making Sense, portrays his subject matter on a large, exaggerated scale (big suit and all!), Storefront Hitchcock is all about understatement, and space.

And this is one of the most understated in the set, a song of delicacy and dreamlike lyrical landscapes, all the while being observed by the off-camera audience in front of him, and those who walk by the window of the titular storefront in which the concert is occurring.

The song originally appears on 1990’s Eye, where it’s something of a deep-cut. Here, it’s a moment of quiet, taking on  an almost liturgical sheen, with a bit of Salvador Dali thrown in. After all, this is Robyn Hitchcock, an artist not generally known for his straight-forward material. And the filming of this show had this as its basis; to showcase the songwriter as a singular performer.

But in some ways, this film is also about the viewer.

END_OF_DOCUMENT_TOKEN_TO_BE_REPLACED

The rock movie once held a certain communal mystique. Even the biggest budget of rock ‘n’ roll film still represented something of a niche market. In days of yore before the home video age, this made the experience of seeing them largely about embracing late-night showings, and cramped, darkened rep theatres. Rock fans all mucked in together to see our vinyl-world heroes take on the world of celluloid. A rock film forced you into close quarters with other fans.

But, what about now in this on-demand content at our fingertips era of ours, when watching a rock concert film is less about midnight screenings, cramped seats, and smuggled-in reefer, and more about home entertainment centers, Netflix subscriptions, and often solitary viewing?

This is one of my favourite moments in rock-u-mentary history; the re-staging of the Tap’s classic prog-rock masterpiece, ‘Stonehenge’ during their 1982 American tour.

Note the prog-rock/Led Zeppelin references which are clear targets here (especially when the mandolin comes out). When I first saw this scene, I nearly died laughing. And the dancing dwarves – you can just imagine the thinking: “maybe if we got short dancers, the set would look bigger…” That’s the genius of the film from which this clip comes, the parody rock movie This is Spinal Tap.

Because the film is about these characters more so then it is about things that happen to them, and focuses so heavily on their personalities and points of view, a lot of the gags in it are what you can imagine they might have been thinking to bring about the events you see on screen. So, the reason it’s a funny movie is not because funny things are said and done (although they are), it’s because of who is saying and doing those things.

What the clip doesn’t show you is bassist Derek Smalls’ (as played by Harry Shearer) ‘practical question”: “are we going to do Stonehenge tomorrow night?”