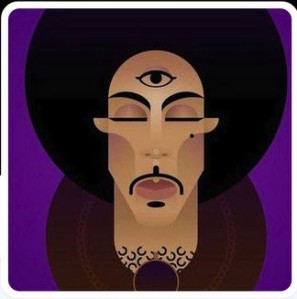 Normally, I’d start out a post like this here on the ‘Bin with “listen to this track”. But, my subject wasn’t much of a fan of the Internet. And which track would sum him up? As such, it’s hard to know how to start this. Maybe just a fact will do.

At the time of this writing, the details of how it happened remain to be sketchy. It doesn’t really matter. He’s gone, and gone too soon. Twenty-sixteen. What gives? And yet too, the fact that the public all across the cultural divide are in mourning shows just how impactful his time on this planet actually was, even if 57 is no age to die.

The eighties, the decade in which he primarily made his name, is much maligned. Prince made it better. He made it better because there was no one on the scene quite like him and he knew it. Part of the reason that the eighties was a troublesome time for music is because it was during this decade that the walls between genres, between audiences, between black and white and in between, male and female, masculine and feminine, seemed so insurmountable. Rock music had become corporatized, close-minded, and cheesily macho. R&B was banished from MTV. We were all locked up as audiences, at a time when genres of music were like islands, never touching each other, and sometimes even at war. This is another way Prince made those times better. His music cut right through all of that bullshit. END_OF_DOCUMENT_TOKEN_TO_BE_REPLACED

Despite being a singular artistic entity capable of creating albums completely on his own, this was the first album released after his work with his celebrated back-up group The Revolution. The previous album Parade (featuring his now very well covered single “Kiss”) was the last record that group would collaborate with him on in name, ending a run starting with 1999 in 1982.

This new record would incorporate some of the material the ensemble had worked up. But, the album would be an amalgam of solo projects as well, from an aborted triple album, to an off-the-beaten path project Camille, something of a female alter ego. The resulting album here would continue to demonstrate Prince’s agility with funk, soul, electro-pop, and rock styles, plus other styles besides.

But, along with songs with sexual themes (“If I Was Your Girlfriend”), and party songs (“Housequake”) for which he was known, Sign O’The Times adds yet another set of themes to his pallette – the state of the world according to Prince.  And what does he see here on the album’s title track, as the world edged closer and closer to the end of the 20th Century? END_OF_DOCUMENT_TOKEN_TO_BE_REPLACED