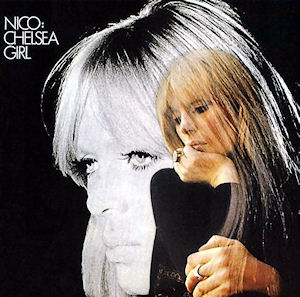 Listen to this track by Teutonic singer, actor, and model Nico. It’s “These Days”, a song as taken from her 1967 record Chelsea Girl, her solo debut. That album is noted by the extremely high quality of songwriting and instrumental talent behind it, including contributions from Bob Dylan, Lou Reed, John Cale, and Tim Hardin.

This particular tune was penned by Jackson Browne, who was a teenager when he wrote the initial iteration of this song. It would evolve later on, and be recorded by several artists including Browne himself later on when he made a name for himself as one of the key figures in the singer-songwriter boom in the early to mid-seventies. Nico was the first to record it in a finished studio version. Browne plays the distinctive electric guitar picking part, accompanying Nico’s distinctively austere and icily distant vocal performance, delivered in her signature lower-register range. All of this is contrasted by a bittersweet wash of strings, added in post-sessions by producer Tom Wilson.

By now, this song has been covered by many, and is perhaps best associated by modern audiences with its use in Wes Anderson’s Royal Tenenbaums. Nico’s recording of this song seems to connect with its active ingredients better than most versions do. And what are those ingredients, exactly? And what does Nico bring to it to make it what it is?  END_OF_DOCUMENT_TOKEN_TO_BE_REPLACED