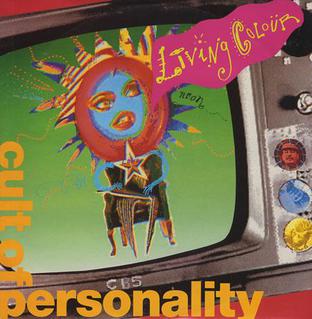 Listen to this track by New York-based hard rock paragons Living Colour. It’s “Cult of Personality”, their biggest hit to date and most recognizable track taken from their 1988 album Vivid. The song was a top twenty song on Billboard’s Top 100, winning the band a Grammy for best hard rock performance, and with a smattering of other awards besides. Since its release, the song has been used across multiple media for many years, from use in video games to (rather ironically considering its subject matter) WWE entrance music.

Despite its sheer scale, the writing of “Cult of Personality” came out of a simple jam during a rehearsal when guitarist and bandleader Vernon Reid played the central riff while playing an entirely different song. From there, a signature hit was born, with central themes spanning the course of a tumultuous twentieth century. It namechecks world leaders with jarring contrast. Joseph Stalin and Gandhi are lined up right next to each other. The voice of Malcolm X starts the song, and Franklin Delano Roosevelt closes it (with a brief interjection from JFK). That’s a pretty broad cultural spectrum.

In an increasingly polarized political landscape all over the world by the end of the eighties, where did this song place on that spectrum? Besides the immense central riff that’s been mentioned, I think this is the song’s central strength; that it doesn’t choose sides along any political lines. That’s not really the point of it. Instead, it tackles a bigger subject, which is all about human perception, our tendency toward myth-making, and other tendencies that make it easy for the right person to use them to influence our judgement when it comes to the facts, pushing us in certain directions for good or ill. How relevant is that today? All too much. END_OF_DOCUMENT_TOKEN_TO_BE_REPLACED