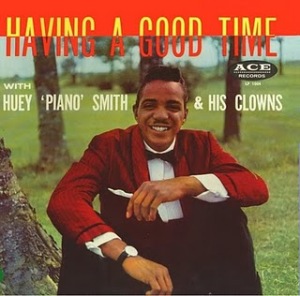 Listen to this track by 88-fingered New Orleans R&B icon Huey “Piano” Smith. It’s his 1958 hit “Rocking Pneumonia and the Boogie-Woogie Flu”, his smash signature hit that sold over a million copies when it was released as a single, and eventually featured on the compilation LP Having a Good Time.

In the end, it’s this type of fun loving, light-spirited playing that nearly everyone associates with the sound of New Orleans R&B, and with the city itself. This song, and Smith as a musician, influenced a legion of players both contemporary of him, as well as the musical acolytes that followed him.

In the ’50s, Smith was an active songwriter, sessioner, and recording artist, knocking out a number of singles in quick succession for himself as well as for other artists including Guitar Slim, Earl King, Little Richard,  Lloyd Price, and Smiley Lewis, among others. In 1957, he formed his own band, the Clowns and began a career which would finish the decade, and then into the ’60s too, with hits on the R&B charts as well as the pop charts.  But, this one would be his trademark; a joyous, life-affirming thing, brimming with glee and sexiness.