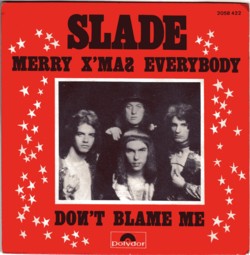 Listen to this track by hitmaking and highly festive British glam-rock purveyors Slade. It’s “Merry Xmas Everybody”, an enormous 1973 hit single that snagged the highly coveted Christmas number one spot on the British charts that year.

The song was an amalgam of elements that writers Noddy Holder and Jim Lea had lying around, from as far back as 1967. This might explain its slightly psychedelic feel. Guitarist and singer Holder had the melody to the chorus, and bassist Lea had the melody to the verses. Holder and Lea fashioned the festive lyrics and the band recorded the song at the Record Plant in New York City in the summer of 1973.

This song would achieve more than just impressive chart showings and eventual platinum sales. Holder’s “It’s Chrrriissssstmas!!” screech would become a personal trademark for years to come during personal appearances in concert and on television. Beyond that, the song would gain a place in the DNA of a whole culture, helping to reveal the values of that culture more precisely at just the right time of year. END_OF_DOCUMENT_TOKEN_TO_BE_REPLACED

Listen to this track by British glam-rock vehicle Steve Harley & Cockney Rebel. It’s Harley’s biggest hit “Make Me Smile (Come Up and See Me)”, a UK chart smash in February 1975, and equally well received in Europe and in Australia. It appears on the LP The Best Years of Our Lives, their best selling record.

For many, this song is a sonic time machine, taking the listener straight back to the last days of the British glam-rock heyday,  and a hair’s breadth from the dawn of punk rock. Thanks to being so tied into the consciousness of a generation of listeners, it would be re-released a number of times over the years, enjoying resurgence after resurgence, in part thanks to its  inclusion in movie soundtracks (The Full Monty, Velvet Goldmine, and others) and in British TV commercials, too.

Ironically, Harley’s most popular song came out of circumstances that were less about his enduring success as a songwriter, and more about his career coming to an end as he knew it.

END_OF_DOCUMENT_TOKEN_TO_BE_REPLACED

Listen to this track by former Velvet Underground quadrant and subsequent solo rock ‘n’ roll animal Lou Reed. It’s “Perfect Day”, a song taken from the David Bowie and Mick Ronson-abetted 1972 album Transformer, which was Reed’s second solo album. It served as the B-Side to his possibly unanticipated hit single “Walk On The Wild Side.”

In relation to that A-side which made his name as a solo artist,”Perfect Day” was something of a slow-burn, pop culture-wise. It enjoyed something of a resurgence when it appeared in a pivotal (and disturbing) scene in the 1996 film Trainspotting. In that scene, lead character Renton (played by Ewan McGregor) shoots up heroin only to overdose,  all shown in graphic detail. He’s then unceremoniously loaded into a taxi cab and anonymously sent to hospital by his drug dealer.

It was the song’s reputation (or perhaps its writer’s) as being connected with the drug that made it somewhat of an appropriate choice as a soundtrack to an overdose. Yet, as much as the stories about this tune have circulated as being a love song to heroin, I think the love expressed in this song goes a lot deeper than that, and says so much more. This is particularly striking when it comes to the song’s ambiguity, despite how easy it is to take it at face value.

So, what is lurking beneath the surface of this song?

END_OF_DOCUMENT_TOKEN_TO_BE_REPLACED 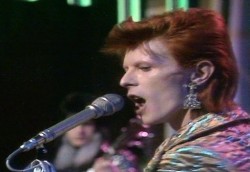 Here’s a clip of androgynous musical brushfire-starting alien pin up David Bowie, and his soon-to-be-erstwhile Spiders From Mars. It’s the recently discovered clip of his 1973 performance of “The Jean Genie” on the British music program Top of the Pops.

The song is taken from the album Aladdin Sane, a record released that very year in April. This song was the lead single, actually released earlier in November of 1972.  This was the height of the glam-rock period, when colourful costuming and gender-bending stage personas met the vintage Chess blues ‘n’ boogie sound.

This particular clip was discovered recently, and broadcast on the Top of the Pops 2011 Christmas special. Bowie and TOTPs go hand in hand, particularly in this phase of his career. His performance of “Starman” in the summer of 1972 galvanized rock fans all over the country and nourished the seeds of British punk, post-punk, and New Romanticism. But despite all that, Bowie had his own preoccupations, namely making sense out of America, the fascination and disorientation he felt about it, and then putting it into his work.

So, how is that revealed in this tune? END_OF_DOCUMENT_TOKEN_TO_BE_REPLACED