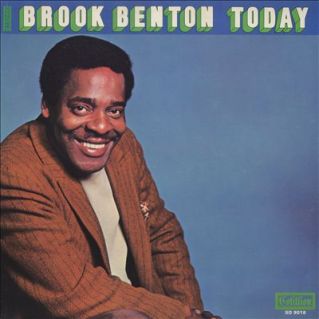 Listen to this track by smooth pop-soul crooner with the sonorous baritone voice, Brook Benton. It’s “Rainy Night In Georgia”, his biggest hit and something of a return to the top ten for a stretch of time after his prime period from the early 1960s. It appears on the album Brook Benton Today, released in 1970.

The song was written by Tony Joe White in 1962 around the time that Brook Benton was having his greatest successes as a songwriter and singer with material of his own. The song is taken from White’s time as a truck driver for the highway department in the titular state, often finding himself working alone on lonely nights in the days before he found success as a songwriter and performer.

By the time Brook Benton recorded the song, he’d not had a hit for some time. But this one would take him to the top ten on both the pop charts as well as the R&B charts, and become one of his best-known songs.

This could be because of the supreme gravitas of what Benton brings to his performance with a signature baritone voice that blurs the lines between pop and soul. The emotional depth in his voice brings this song to life, suggesting a whole novel’s worth of drama underneath a nocturnal landscape of desolation, and raw human loneliness. And with that, it becomes something more than just a tale of one man’s lonely journey, and approaches something more universal.  END_OF_DOCUMENT_TOKEN_TO_BE_REPLACED