Having said that, it also sprang directly from the experiences and sensibilities of its writer, born and raised in Brixton and very aware of the tensions that were growing there by the end of the seventies. In this, the song was very prescient in what would happen in that very neighbourhood not long after this song was released. END_OF_DOCUMENT_TOKEN_TO_BE_REPLACED 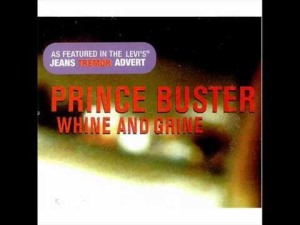 Listen to this song by first wave ska innovator Prince Buster.  It’s “Whine & Grine”, a song which was not only a signature tune for Prince Buster, but would also inspire the British ska revival in late-70s Britain.

Before there was reggae, there was ska, developed primarily in Jamaica when the local folk music was applied to an attempt at creating a local take on soul music and Motown pop.  Along with Toots & the Maytals and Desmond Dekker, Prince Buster (born Cecil Bustamente Campbell in Kingston Jamaica, 1938) was a towering giant in Jamaican music in the 60s.  And of course, his influence would extend across the Atlantic to Britain by the 70s, when Carribean immigrants imported ska sounds, and further inspired young Britons to form bands of their own with reggae and ska as major ingredients to the music.

This tune is a Prince Buster standard, yet the first time I heard it was on The (English) Beat’s debut I Just Can’t Stop It

.  Ska had become to British groups in industrial areas what American R&B music had been in the 1960s.  And full of the same sexual innuendo too, with “rough riders” and “smooth strokers” a-plenty. Above all, it’s dance music, party music, meant to amuse.  And in the late 70s Britain, a little bit of that was needed, with unemployment being at epidemic levels.

Prince Buster meanwhile would remain to be an active force in music, active today and venerated at the same time as one of the architects of reggae and rocksteady, and is considered to be one of the prime figureheads of first-wave ska.

For more information about Prince Buster, and more music, check out this article from The Guardian.

.  Among the bands coming out of the ska/reggae revivalist movement in the Midlands of England by the late 70s and early 80s, UB40 had the most commercial success, although it’s important to note that they were never officially a part of that scene.

I first heard this tune on the band’s 1983 Live

album, a song about the disparity between the first and third worlds, with some references to the absurdity of religion in the face of human suffering thrown in.  I was 14 at the time, unaware of most of what was going on in distant places.  But the weightiness of this song, the stark imagery in the song’s lyrics, more than made up for that lack of awareness.

The lamenting sax lines from saxophonist Brian Travers, along with Ali Campbell’s plaintive vocal convey the sadness and the anger in this tune.  And the rhythm makes each line hypnotic, holding the attention of the listener. It’s always annoyed me that reggae has been sidelined as music to smoke pot to, especially when so much of the best of the genre is about paying attention, and not letting it wander.  And this was the strength that UB40 had on their early albums; they made reggae music that had something to say, like the music of those who influenced them.

UB40 were more of a purist reggae outfit when they started out, leaving behind the abrasive textures of punk which marked the Two-Tone sound which was another prevalent musical scene in Birmingham, Coventry, and the outlying areas. This is one of the major reasons why they are thought of as being separate from their contemporaries like the Specials or The Beat.  They would eventually leave the rootsy sounds of Jamaican reggae too,  and take it in a more AM radio pop-reggae direction by the late 80s and into the 90s, which diluted their sound to the band’s detriment.

But, their first few albums were very focused on their dual purpose as a band; play reggae and make money.  If this last bit sounds a bit on the mercenary side, it’s because these guys had all lost their jobs and formed the band as a means to make up the difference.  They even named the group after the UB40 form, which is the documentation needed to get their dole money.

After they gained an audience and rose in stature, they most likely had a more difficult time justifying their unemployment benefits.  Yet, at least in the beginning, they were giving voice to that audience by singing about what they perceived to be a crumbling society around them, as well as how the corruption of their government was affecting life in the Third World.  In short, they were a long way from reggae covers of Elvis tunes, at least for a while.