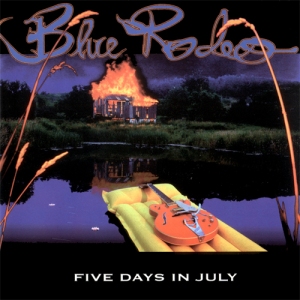 Listen to this track by Canadian institution and alt-country pioneers Blue Rodeo. It’s “Know Where You Go/Tell Me Your Dream”, the closing section made up of two connected songs as taken from their 1993 record Five Days In July.

Blue Rodeo are celebrated on a grand scale here in Canada, having initially built their reputation on Toronto’s Queen Street scene from their first gig in 1985 at the famous Rivoli. They became a stalwart live act from there, reaching stratospheric heights by the end of the decade and into the nineties. By the time they recorded Five Days In July, they were widely regarded as one of the biggest acts in the country, having long since distinguished themselves via the work premier-level songwriters and band principals Jim Cuddy and Greg Keelor.

With that history in place, the band were still interested in progressing their sound beyond their influences as they’d always sought to do, those influences being that Cosmic American sound popularized by The Byrds, Gram Parsons, and Harvest-era Neil Young. To do so, they did what another Band once had done; they retreated to the countryside for a while. END_OF_DOCUMENT_TOKEN_TO_BE_REPLACED

Here’s a clip of Canadian alt-country pioneers and songwriting giants Blue Rodeo with their 1990 hit “Trust Yourself”, taken from their album Casino

To many, alt-country was a beast born much later than 1990, when bands like Wilco, the Handsome Family, and The Jayhawks began to ignite scenes all over the States, particularly as evidenced in the No Depression sound.  But, Blue Rodeo were quietly making albums from the mid-to-late 80s in Canada, with singer-songwriters Jim Cuddy and Greg Keelor musically navigating between classicist country-rock crooning, and acidic rootsy bile respectively. Early gigs with k.d lang opened some doors for the group, and soon they had a loyal following of their own.

There were a lot of early critical parallels between Blue Rodeo and the Band, especially when keyboardist Bob Wiseman was in the group. But, to me their early sound was more stylistically akin to the Byrds, with twelve-string guitars and hazy, 60s-influenced folk-rock sounds infused into their songs.  A high point in their career for me was 1993’s Five Days in May album, when the band retreated to the Muskoka region, just north of Toronto – known to Ontarians as ‘cottage country’ – to jam, and to record. If there is a parallel with the Band, then maybe this album is the best example; a bunch of Canadians in the woods making music in a clubhouse, a la Big Pink. Otherwise, I think these guys have designed their own template.

I heard a snippet from the sessions while I was going to University, living in North York in a shared house with no TV.  Radio, particularly the CBC, was a regular thing for us.  Their song “Know Where You Go/Tell Me Your Dream” from that record grabbed me by the scruff of the neck and demanded I seek it out, which I dutifully did.  It remains to be one of my favourite albums.  And ‘Trust Yourself’ really made me think about how great country music could be even earlier on, even if it’s arguable that this tune isn’t exactly a country song per se.

I sometimes marvel at the level of talent in our country here, with our modest little population.  And I equally wonder why more of our artists aren’t world-renowned, particularly when songs like “Lost Together”, “Till I’m Myself Again”, “Diamond Mine”, and so many others are such tremendous songs.  Blue Rodeo are certainly a band I think everyone needs to have heard.

For more music, check out the Blue Rodeo official site.