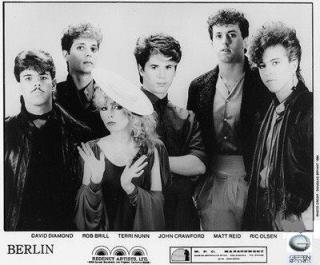 Listen to this track by Los Angeles new wave Europhiles and future Top Gun soundtrack fixtures Berlin. It’s “The Metro”, a single that was featured on their 1983 album Pleasure Victim. A hair’s breadth just before Madonna, and in the years just after the type of synth-based music that was pioneered by Kraftwerk in the late 1970s, Berlin hit the middle ground with a sort of Americanized version of European new wave, which may explain their band name.

This song was one of their bigger hits, just after their initial international hit subtly titled “Sex (I’m A …)” that had scored a chart placing on the Billboard top 100, but hadn’t cracked the top twenty. This one was always my favourite, their first on a major label (Geffen), and with a sound that captured the essence of the classic synthpop era that would soon disappear in the years that followed.

Yet, even after this song enjoyed its initial success, it would continue to be a signature for a band well beyond the era out of which it came. And it would offer a tale that captures a classic post-punk approach, too – ambiguity.
END_OF_DOCUMENT_TOKEN_TO_BE_REPLACED