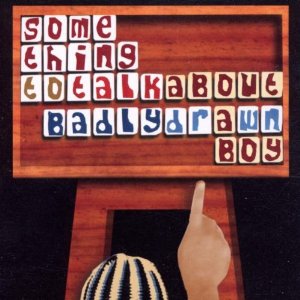 Listen to this song by indie songwriter-turned-soundtrack composer Damon Gough, better known as Badly Drawn Boy.  It’s “Something to Talk About” as taken from the 2002 soundtrack album from the film About A Boy, originally a novel by Nick Hornby about a guy living off the royalties of a children’s song his dad wrote, yet finds himself unable to connect with children himself, or in fact with anyone, until – well, see the movie, or read the book.

But, for our purposes here, Badly Drawn Boy’s tune is a recurring musical theme that runs along side of the action, sort of as a bird’s eye-view to what’s going on the lives of the characters, which is what songs in a movie should do.

What also makes a truly exceptional song that appears in a film is that it also takes on a life of its own outside of the context of the film. In this case, author Nick Hornby, clearly a music fan (see High Fidelity), was a fan of Gough from early on, making him a perfect choice to compose music and develop songs for the soundtrack. Luckily, filmmakers Chris and Paul Weitz agreed.

END_OF_DOCUMENT_TOKEN_TO_BE_REPLACED

Damon Gough AKA Badly Drawn Boy provided me with a memorable show in 2000, but for more than the most obvious reasons.

In the summer of 2000, the name Badly Drawn Boy was just one I’d heard of, not one from whom I’d actually heard. At that time, Gough had been the centre of a buzz surrounding a number of EPs he’d put out under the BDB name on the Twisted Nerve label. Since I had somehow got a hold of this buzz through some music paper or other (probably MOJO), and subsequently found myself at the Glastonbury Festival that year, I decided to adjourn to the “New Bands” tent, and see this Badly Drawn Boy for myself.

I have to say, that I was impressed overall. It was clear the guy had (and has) talent. But, his sense of showmanship was non-existent in any traditional way. And this is not to say that it wasn’t entertaining. He would start a song – like the upbeat and joyous ‘Once Around the Block’ (see link below) – and the crowd, who knew his stuff, would go nuts. Then, he’d stop completely and say, “ah, you like that one, do you?”. But, then went onto to something else. I guess it should have been frustrating. But, because I didn’t know a note of the guy’s music, I was intrigued.

The pinnacle of the show had to be when he stopped a song to answer his phone. I am not talking about a cell phone here, people. I am referring to one of those big, black, rotary-dial table phones popular in the 70s and 80s. It was a Jim Rockford phone. And it was on stage in full view of the audience. I’m not even sure I noticed it to start with, although I can’t believe I didn’t.

Anyway, it rang. Loudly. A few times. So, he stopped the tune he was playing and answered it.

It was his Mum.

At the end of the show, he told us that his record was coming out at the end of the summer, and that we should buy it because he “needs the money”. Fair enough, I thought. And I did buy his record – The Hour of Bewilderbeast – which remains to be one of my favourite albums of all time. I’ll bore everyone with my thoughts on it another time. And he went onto to have a pretty great career, even scoring a movie starring Hugh Grant, About A Boy, the soundtrack of which is also a great little record.

I don’t know whether I should have felt ripped off. But, I didn’t. Maybe if he’d pulled it when I’d paid specifically to see him, I might have. But as it happened , he was playing the new bands tent, and I suppose he knew he’d have nothing to lose by playing it (very, very) casually to a members of the crowd who could see whoever else was playing if they wanted to get their “money’s worth”.

Having said that, I heard his headlining shows in the years immediately following my show had a similar feel, and that some did feel a bit ripped off by his lackadaisical approach to showmanship. But, I’d like to think that if his Mum were to call again, she’d make sure that it wasn’t when her son was playing the Hollywood Bowl.

Here’s some footage of Badly Drawn Boy performing his ‘Once Around the Block’ as I might have heard it, but without the interruption this time.

Hover over the image and click the ‘play’ icon. To enlarge the viewing window, click the magnifying glass icon.