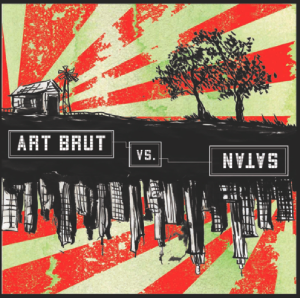 Listen to this track by Deptford punk rock inheritors and comic geeks Art Brut. It’s “DC Comics and Chocolate Milkshakes” an anthemic cut off of their self-referential 2009 LP Art Brut vs Satan, their third.

By the time the band came to record this album, they had hit their stride and were free enough financially in their personal lives to all take the time to record while in the same studio together. On previous records, they’d had to stagger the sessions to make room for their straight jobs, with each member coming to lay down parts at different times. With Art Brut vs Satan, they could play like the punk band they were; in a room at the same time bashing out the tunes. It helped that Frank Black, himself no stranger to recording his own bands live off of the floor, was steering the ship as producer.

And what of this song, a tale of a twenty-eight-year-old boy who still reads comics and drinks milkshakes? Well, the arrested development angle plays somewhat into what it means to be in a rock n’ roll group where staying forever young, or at least with a teenage mindset, is actively encouraged. Even if there is a more than a whiff of self-deprecation to be found here, I think this song has a few things to say about age and our perceptions of maturity that actually shows wisdom beyond its years. END_OF_DOCUMENT_TOKEN_TO_BE_REPLACED