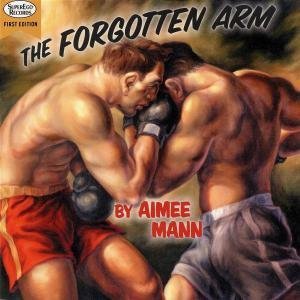 Listen to this track by singer-songwriter and boxing fan Aimee Mann. It’s “Goodbye Caroline”as taken from her 2005 concept record, The Forgotten Arm. That title comes from a boxing move, whereby you throw a blow with one hand to make your opponent think that there’s nothing else coming. Then, you throw the other blow immediately after, delivered by your other “forgotten” arm, even harder. That’s how you get it done in the ring, and it serves as a pretty powerful metaphor about how life can go, too.

But, what about this business of concept albums? It sends cold pricklies up the necks of some fans, and thrills of delight in the hearts of others. This may be because some concept albums tend to get bogged down, serving the concept rather than the songs.

Mann’s record traces the relationship of John, an alcoholic boxer, and his love being the titular Caroline. And, this tune inside of that larger narrative just sings; a jangly pop classicist gem with a bit of folk-rock flavouring thrown in there too.

The lyrics giveaway something of the turbulent nature of love, particularly in the face of trying times. In line with the rest of the record, love is not a cure all for life’s demons, just a context for them. And in this song, faith in love is perhaps imbalanced, with the threads of that love being being somewhat tenuous. END_OF_DOCUMENT_TOKEN_TO_BE_REPLACED

Here’s a clip of pop-chanteuse and singer-songwriter extraordinaire Aimee Mann with a track from her 2000 album, Bachelor No. 2

, which is comprised of songs featured in the film Magnolia, along with separate tracks apart from that project. This song “Save Me” garnered Mann a Grammy nomination in 1999, as well as an Oscar nomination for its inclusion in the film.

Aimee Mann is clearly a gifted songwriter, using melodic touches which are not far removed from a hero of mine, Neil Finn.  And her voice isn’t a million miles away from yet another hero, Chrissie Hynde.  But her career path has been fraught with false starts.  She had chart success initially with the mid-80s hit “Voices Carry” with pop band ‘Til Tuesday.  It was, however, a one-hit wonder.  So who would have thought that Mann could come out of that this many years later as a solo artist making critically acclaimed records?

If her short-lived pop chart success is looked upon as a false start, then perhaps her meeting Jon Brion who contributed to the band in its latter days justifies her time in Til Tuesday.  Brion proved to be an important production partner later in her career, including working on the Magnolia soundtrack along with Mann.  Yet, it’s Mann who came out as a superlative pop writer despite a lack of traction after ‘Voices Carry’, and one able to write in that vein in an intelligent manner.  The cues for this were evident even while still in the group, having the skills to collaborate with Elvis Costello on the album track ‘The Other End (of the Telescope)’ on the band’s Everything’s Different Now LP in 1988.  Costello included his take on the song on his own All This Useless Beauty album in 1996.

Despite her range as a writer, and kudos from her peers, Mann struggled to sell her material, partially due to a bad record deal with a failing label, a situation from which she escaped by 1995 but hurt the success of her debut album.  Bachelor No. 2 was something of a breakthrough for her, and subsequent releases have had critics and fans in states of anticipation and delight ever since.  In addition to that, her skills as a songwriter sparked the imagination of filmmaker Paul Thomas Anderson, who modeled the characters of his Magnolia film directly from her Lennonesque “Save Me”, the song which he also included in the soundtrack along with three other Mann-penned songs.   Aimee Mann continues to be a frequent contributor of songs to TV and movie soundtracks, as well as being known for her cohesive solo albums and live shows.

To preview tracks from the new record, and to hear ones from past releases, check out the Aimee Mann MySpace page.