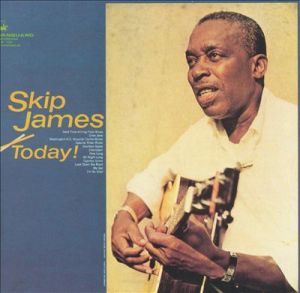 Listen to this track by Bentonia, Mississippi guitarist, pianist, and all-around legendary bluesman Skip James. It’s “Hard Time Killin’ Floor Blues”, a sepia-toned treasure from the age of delta country blues that would be featured on James’ 1966 album Today!

The song would be sourced from his repertoire that appeared many years before in 1931 with his initial recordings on the Paramount label. During that era, Skip James’ career as a full-time musician and songwriter would be scuppered by the Great Depression. When most of your audience doesn’t have a job, it’s hard for them to buy records. So, after recording his Paramount sides, he slipped back into obscurity. This economic reality had impact on many, including Mississippi John Hurt and Son House, among others.

But, like those two other musicians, Skip James would enjoy a second wind in the 1960s, thanks to a bona fide hero’s quest to find the grail of true American culture. END_OF_DOCUMENT_TOKEN_TO_BE_REPLACED

Listen to this track by redheaded guitar slinger and roots and blues ingenue turned American music matriarch Bonnie Raitt. It’s “Love Me Like a Man” as taken from her second album Give It Up, released to the world in the summer of 1972, when she was a fresh-faced 22 year old.

Bonnie Riatt is known today particularly for the work she created in the late ’80s and into the ’90s. Albums like Nick Of Time and Luck of the Draw, plus songs like “Something To Talk About”, and “I Can’t Make You Love Me” led to armfuls of Grammies. They also reveal Raitt’s superior command of emotional tone, arrangement, and great chops, even if they were created with a polished, adult contemporary sound in mind. But, her career began well before that work was created, upon a sturdy foundation of the blues.

The idea of “contemporary blues” is off-putting to some. It’s a bit of a red flag for me, if I’m honest. But, this song is certainly one that can be called contemporary although maybe in a different way then one might expect.

END_OF_DOCUMENT_TOKEN_TO_BE_REPLACED

The song is a well-travelled British folk tune steeped in tragedy. There’s nothing like it for a great folk ballad from that tradition. And it doesn’t hurt for a blues tune, either. Because of Phelps’ command of the material, this rendition is potent, seeming to touch on both of those musical traditions all at once.

The song has its roots in Scotland, with the tale varying over the years as many, many folk musicians interpreted it over generations.  In some versions, the devil is a character, with the song also known as the more floridly titled “The Daemon Lover”. In earlier versions, the devil lures the house carpenter’s wife away from her home, and her child, with the promise of riches abroad. That’s a bit of a crossover into the world of the blues, too. The devil is a busy guy in many blues tunes from Skip James to Robert Johnson.

But In Phelps’ version the devil in his guise as a deal-cutting, saint-tempting figure of ultimate evil is nowhere in sight. There is a force more insidious at the heart of this version. END_OF_DOCUMENT_TOKEN_TO_BE_REPLACED

Recently, a new image of legendary bluesman Robert Johnson has been put forward in a whirlwind of legal implications, not to mention questions of authenticity.  Take a read of the story from Vanity Fair about the search for Robert Johnson.

When looking at a picture on eBay which was described as an early picture of B.B King, vintage guitar seller Steven “Zeke” Schien was sure that he’d found something even more valuable – a third photograph of the legendary and mysterious Robert Johnson, who was murdered in 1938 when, according to myth, a jealous husband poisoned his drink.

Before that of course, Robert Johnson recorded 29 songs from November of 1936 to June 1937, many of which had an untold effect on the development of the blues and of rock music too; “Love in Vain”, “I’m a Steady Rollin’ Man”, “Crossroad Blues”,  “Me and the Devil Blues” all standards and among many Johnson tunes covered by the Stones, the Yardbirds, Fleetwood Mac (under Peter Green), Cream, Led Zeppelin, and many others.

What was it that tipped Schein off that it might be Johnson?  It was the fingers, depicted in two other photos of Johnson as being abnormally long.  Some of my music geek associates noted the same thing when we talked about whether or not this was indeed Robert Johnson.  It is Johnson’s hands that characterizes him visually, and which possibly allowed for his incredible guitar skills too, at least in part.

Despite dying at the end of 1930s, Johnson remains to be a platinum-selling artist, with his 29 songs still being well sought-after artifacts of another age.  And the myth surrounding him, that he sold his soul for fame and fortune, only makes his lost history and his persona as the haunted bluesman damned for eternity for momentary gain all the more compelling.

For more information about the new picture and the man himself, check out the official Robert Johnson website.

album.   The record was cut in 1963 soon after he was ‘rediscovered’, actively sought out by blues archivists after 30 years of having quit music.

John Hurt was a native of Avalon Mississippi, working as a farm hand during the day and playing what is now considered ‘old time’ music in his spare time.  In 1928, aged 36, he got a chance to record with legendary early jazz and blues label Okeh records. He recorded two sessions that year, in Memphis and in New York City, with the label adding the ‘Mississippi’ in front of his name for authenticity.  He made eight recordings.  One of the songs he recorded, was this one, “Candy Man Blues”, with plenty of sauciness added into the lyrics before records by African-American musicians became mainstream. He was paid $240 for the Memphis sessions, which he then spent to go to New York for more.

The twin problems of poor sales, and then the failing of the label itself during the Great Depression later on curtailed Hurt’s lasting career as a full-time musician.   He returned to Avalon and picked up where he left off, with farm work during the day, with the odd non-professional gig at parties and other community gatherings at night.  He was otherwise lost to history, at least for the time being.

Fastfoward to 1963: archivist and blues enthusiast Tom Hoskins having heard Hurt’s 1928 recordings was determined to go to Avalon to see if the voice behind the music was still around.  Hoskins found the bluesman still living modestly, convinced him that he had an audience, and returned with him to Washington DC at the height of the 1960s folk-boom. Old time music and rural blues had been given an injection of life, with a new audience of students looking to hear original American folk players like Hurt, suspicious of the lack of depth and perceived dishonesty in modern pop music at the time.

In making public appearances, Hurt began the second phase of his career as a professional musician, recording his material in the studio for a new generation. An appearance at the 1964 Newport Folk Festival the same festival which featured a young Bob Dylan, solidified Hurt’s status as a true original, his skills as a guitarist remaining undiminished.  He was a star at 72 years old, enjoying another two years of fame before his death in November, 1966.

Hurt’s sound would continue to have an impact on musicians long after his death, including Bruce Cockburn, Beck, Lucinda Williams, Gillian Welch, and others.  These artists, among others, contributed tracks to the Avalon Blues: A Tribute to the Music of Mississippi John Hurt

album in 2001, produced by songwriter Peter Case who is a lifelong fan himself.

The thing I love about this story is that something which had been the victim of bad timing (the Great Depression) eventually benefited from very good timing (the Folk-boom on American college campuses in the early 60s).  And I think its great when cultural treasures are discovered and given their due, which is an ongoing trend in blues in particular, a tradition which knows enough to value its own history.

For more about Mississippi John Hurt, check out his MySpace page.

To contribute to the Mississippi John Hurt Foundation, a charity set up to aid disadvantaged youth, visit the official site for more information.