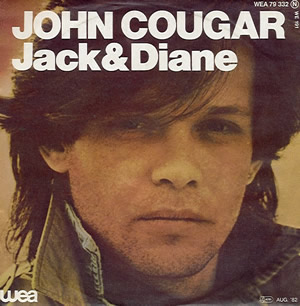 The song had enormous impact not only on the charts, but on pop culture during a time when music was becoming more and more stylistically ghettoized. As popular as it was, and is, there’s just something about this one that set it apart, seeming to have a cinematic quality that very few songs at the time contained. By 1982, “Jack and Diane” sounded like a progression for Mellencamp, who was then gathering momentum for a classic run of singles during the eighties and into the early nineties.

“Jack and Diane” concerns itself with two American kids growing up in the heartland and unsure of their places in the world. And yet, as with so many records that help define the times in which they’re released, there is an ocean of meaning underneath the scant story presented here. And ironically, much of it only comes to light as one gets older.

For all of its successes, “Jack and Diane” had a tough birth for a hit record. When Mellencamp initially played it solo on acoustic guitar, it worked fine. But it didn’t work with the full band in the studio that well, and nearly ended up on the scrap heap. Former Spiders From Mars guitarist Mick Ronson was on hand at the session to help Mellencamp work out the very unconventional arrangement. The result is a song full of tentative gaps and stutters, with notable empty spaces filled by hand claps which were initially in place only to set the tempo. Ultimately, they had to stay in to keep the song’s momentum going. On paper, this song shouldn’t have worked. But it was eventually added to the RIAA Songs of The Century list, coming in at #287. As the poet once said; you never can tell.

In some ways though, the song’s tentative and sonically inconsistent arrangement really suits the subject matter. It does more than that, besides. It sets an environment for the subtle drama that unfolds within it. Even now, it’s still his best result in matching lyrical content to a musical arrangement. Those false starts, gaps, and empty spaces helps him tell the story of two young people who live in the moment as children do, but are slowly coming to the realization that their childhoods are almost at an end and that an uncertain future lies ahead of them.

Thirteen years old myself in 1982, I just thought the two kids in this song were just like me; young, slightly bored, and full of hormones. This was just another rock song about being young and horny, which on one level, it is. But this song contains ingredients that lay dormant, only to be understood later after the thrill of living, while not necessarily gone, has at least been tasted a few times, and with that experience changing us forever. That’s really the kicker with this song, and is a big part of what makes it so special. It was a huge hit. It spent four weeks on Billboard’s Top 100. These days, you can hear it in the supermarket.

And it’s a song about existential dread very effectively disguised as a teen anthem.

And here’s something else; “Jack and Diane” is knowingly presented as a construction. The people in the story are characters. The first line, remember, is: “little ditty ’bout Jack and Diane”. Mellencamp starts this song by telling us it’s a song. In this, all of the voices in this song he’s written do not really belong to two sixteen year-olds. They belong to him  He tells the story so well as supported by the music that it’s easy to completely forget its structure. We believe in Jack and Diane, and their lives. All the while, it’s Mellencamp planting the seeds, telling us that innocence and experience are on two sides of the knife’s edge.

By the time we get to a certain age, we have intimate knowledge of what Mellencamp is saying about growing up though the figures at the center of “Jack and Diane”. At 13 when this song was all over the radio, I had no real conception of what adulthood was really about. If I’d had to guess, I would have thought that the struggles I was beginning to feel about what life means, the control I would have over those struggles, and the knowledge of where my life was going would be cleared up by the time I became an adult. But what lay at the heart of this song was that Jack and Diane always knew differently all along, because the voice behind them, Mellencamp’s, knew differently; that our lives are mysterious by nature no matter how old we get, and that the perceptions we hold when we’re young will be gone one day as experience changes them, never to return.

In hearing “Jack and Diane” on the radio in 1982 and then again driving home one night in 2017, the contrast is exquisite. As a kid, I heard the voices of Jack and Diane. As an adult, I hear Mellencamp’s. And that’s another ingredient that makes this song special; it’s an honest expression of what it means to be alive as confronted by what living entails good and bad, with life itself serving as both a song of innocence and experience all rolled into one.

All it took was the passage of time to reveal itself fully.

John Mellencamp is an active singer-songwriter, author, activist, and filmmaker today.  Find out about his unique career and more current pursuits at mellencamp.com.