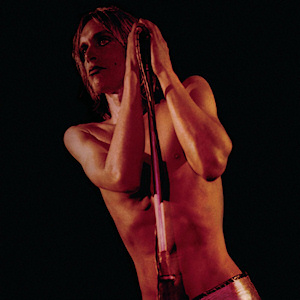 Listen to this track by garage rock, glam, and proto-punk champions from Ann Arbor Michigan, The Stooges, aka Iggy & The Stooges. It’s “Search and Destroy”, a landmark cut off of their monumental third LP, Raw Power released in February 1973 . The song was a single, with album track “Penetration” as a b-side, kicking off the album like the sound of an exploding munitions dump. This was the sound of a fully realized Stooges, a band brought back from the dead by the time the album was recorded, produced by lead singer and creative head Iggy Pop, and David Bowie.

By the time this song was laid down and the band was reassembled after breaking up, changes had been made to The Stooges’ line-up. Drummer Scott Asheton remained behind the kit. But bassist Dave Alexander was gone, sidelined by substance abuse and addiction. Guitarist Ron Asheton took his place on bass, while lead guitar duties were handed over to newcomer James Williamson, co-writer of this song. His parts are brought well to the foreground throughout, although the approach to production and mixing of the record didn’t leave too much room for nuance initially. The history of how the record was recorded and mixed is an elaborate and intricate one even before it was transferred to CD format in the late-nineties under the guidance of Bruce Dickinson (Mr “more cowbell” himself). One of the notes on the CD version I have includes Iggy’s assurance that “everything’s still in the red”. Thank goodness for that!

All the while, this song has taken on a life of its own, being a go-to track when compiling lists of best hard rock, punk, glam, whatever, songs ever recorded. It certainly one that demands attention, and one of the high points of Iggy Pop’s career all around. A good portion of the reason for that in my mind is that despite the seeming lack of nuance happening in the music, there are definite layers of meaning to be found in its text that belie the blunt force of its delivery.

Even today, “Search and Destroy” is a ferocious assault on the senses to be compared with any top shelf hard rock song. Williamson’s guitar sounds like the rattling of overheated machine guns, while the drums and bass are erupting clouds of flesh-shredding debris and flying glass. Iggy’s vocal is in the center of the fray, the voice of one who sounds less dangerous than utterly lost and desperate; a figure of pity, a forgotten boy. The violence and horror of conflict seems to be bonded to this song at the molecular level. The song makes no clear political or social statements. Yet at the same time, it remains to be a powerful expression of what it’s like to be inside of a war zone about to be cut down in a hail of bullets and shrapnel, with much of that effect down to the sonic elements that contributed to its creation.

One of the great things about this song is that it takes disparate influences and smashes them together, while still managing to achieve a kind of unlovely seamlessness. Through its sheer bludgeoning assault, and like most strains of hard rock, it borrows heavily from the blues traditions of Muddy Waters. Indeed Iggy Pop made a pilgrimage to Chicago before The Stooges recorded their first record in the late-sixties, with the sound of electric blues making its way into the band’s music while at the same time not dominating it. “Street-walking cheetah with a heart full of napalm” is pure blues braggadocio on the surface, like a more unstable “nach’l born lover’s man” or “king bee buzzin’ around your hive”. Here, it’s translated into the paradigm of early seventies glam-rock androgyny, and during a troubling time in U.S history all the while.

Yet another influence in this song is that of protest music, seeming to incorporate the horrors of Vietnam War footage that  was a staple on TV news by the early seventies. By then, there was no denying the violence that was happening in the world, no gussying it up and making idealistic anthems out of it. Violence was delivered directly into homes thanks to the earliest days of mass media. Look out honey, ’cause they’re using technology! The title “Search and Destroy” itself is a military term, one Iggy got from the pages of Time Magazine, a publication he read frequently because it struck him as the voice of the mainstream against which he sought to react, considering himself to be outside of it. Indeed, the figure in this song is not a part of that mainstream either. He’s been utterly dehumanized to the point where his identity and his function are one and the same, spiralling toward inevitable destruction. Somebody’s gotta save his soul!

This was the atmosphere of the times, when the flower-power idealism of the sixties was fading fast as Richard Nixon’s second term in office by January 1973 had made severe inroads to finishing it off for good. That’s what lays beneath the surface of this song that came out at this very same point in history when the political struggles and brute conflicts enflamed by Cold War politics were building a head of steam, moving toward a conclusion that seemed to be worryingly unknown in its details, and yet horrifically certain all the same. This song captures that feeling exactly in a way that an elaborate and eloquent statement about wars being a crime against humanity perhaps cannot do as well.

Maybe this is why “Search and Destroy” remains to be so relevant today, covered by many artists and appearing in many contemporary soundtracks in movies and television shows; somebody’s still gotta save our souls from those forces that strip us of our humanity and turn us into grist for the mills of war.

After a career of (severe!) ups and downs and brushes with death and madness, Iggy Pop is an active musician today. You can catch up to him at iggypop.com. And while you’re at it, here’s iggyandthestoogesmusic.com to investigate, too.

One thought on “The Stooges Play “Search and Destroy””