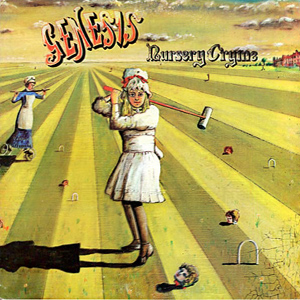 Listen to this track by parodic prog rock paragons Genesis. It’s “The Return Of The Giant Hogweed”, a tale of botanical horror as featured on the 1971 album Nursery Cryme, their third. The album kicked off a new era for Genesis; new members, new textures, and a new sense of scale.

The vital additions to the band by this time were drummer and vocalist Phil Collins, and guitarist Steve Hackett. Both musicians added their considerable instrumental chops to the material on the record to raise the whole band’s game. As a result, they helped to assure the group’s place as top shelf participants in a growing movement of bands at the time who traded on complex musical structures and often very high-minded lyrical subject matter.

To me, what made Genesis unique in their early output is that they could take conventions of all kinds and bring out the absurdities in them, no matter how obscure or mundane. And here, they’re able to write a song about an invasion, while also rooting it (pardon the pun) in an area not generally drawn on by most songwriters; botany. But there’s also hint at another area of interest that can be traced in their work that delves deeper still.

When it came to this advanced sense of the absurd and the parodic, Genesis’ targets for satire and parody were wide, even aiming their sights at the conventions of prog while doing so. They certainly do that here, with fantastical drama in the lyrics and in their arrangements too that poke fun at the serious-mindedness of some of their peers. With that in mind, they also exemplify the best-in-class of the genre at the same time. For instance, Steve Hackett’s guitar work on “The Return Of The Giant Hogweed” and on other tracks on the album is revolutionary, specifically in his use of a technique called “tapping”, wherein the guitarist literally taps the fretboard like one would play a keyboard. A young Eddie Van Halen was listening.

Meanwhile, singer Peter Gabriel uses a heightened rock bark of a voice instead of his usual raspy croon to tell the story of the invading species seeking its revenge. Here’s the thing, though. For those of you not in the botanical know, the giant hogweed is real, robust, and a very invasive species. The plants really do “need the sun to photosynthesize their venom”, which is why “strike by night!” (my favourite line because it’s so comically melodramatic) is actually a viable strategy for removing these plants that cause serious burns to human skin due to toxic substances they produce. That’s straight out of a textbook, right? Yet it’s Gabriel’s delivery in particular that makes us think more of John Wyndam’s Day Of The Triffids than we do The Field Guide To Invasive Species In Britain. This is no sci-fi monster movie. It’s just presented as though it is, which is the joke at the center of the song.

With all of that said, I don’t think this song is just an eight minute-plus gag put together to crack people up. This song fits very well into a certain thematic paradigm the band had explored previously, and would delve into more deeply on ensuing albums. One of the main thematic threads to be followed in Genesis’ early output is that of the British character and how the often reserved and controlled nature of it on the surface belies the often unhealthy turmoil that churns and seethes below it, a dynamic passed from generation to generation, not unlike the spread of an invasive weed.

In this song, a Victorian explorer brings a noxious weed to England and :

Fashionable country gentlemen had some cultivated wild gardens,
In which they innocently planted the giant hogweed throughout the land.
Botanical creature stirs, seeking revenge.
Royal beast did not forget …

In this, the giant hogweed serves pretty well as a metaphor for a psychological inheritance from an earlier, repressed era. This lends itself to conversations that are perhaps not so funny, with that inheritance also becoming rampant and hard to kill inside of oneself, stemming from an age in which primal impulses and open expression of emotions were frowned upon and actively discouraged. In this sense, the idea of a return of some stalking beast is less to do with the contents of a botany text or science fiction story, and more to do with the psychology of generations of people with those tendrils of the past reaching toward them in the present. As tough as the giant hogweed is to kill, this inner struggle is the tougher fight.

For more on this song, be sure to check out this live version of “The Return Of The Giant Hogweed”, which among other things demonstrates Steve Hackett’s tapping technique alluded to earlier.

2 thoughts on “Genesis Plays “The Return Of The Giant Hogweed””