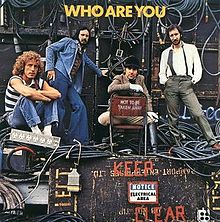 Listen to this track by former mod representatives turned classic rock institution The Who. It’s “Who Are You”, the concluding song that served as the title track to their 1978 album Who Are You. That record would represent the end of an era for the band when drummer Keith Moon passed away a month after it was released. The attached rendition of the song here is featured in the 1979 documentary The Kids Are Alright.

In some ways, this song and its album marked the end of an era for rock music, too. By the end of the seventies, popular music was exponentially dividing into multiple streams including punk, new wave, and disco. Certain tracks on this album make direct reference to that. Meanwhile, the band itself was struggling along after a three-year recording hiatus with Moon’s health in visible decline. The dynamics between musicians and in turn between the band and the production team that included Glyn Johns and Jon Astley were beginning to fray at the ends as well. These were not easy sessions. Perhaps this was the result of a shot of self-awareness at being among the second generation of rock musicians beginning to sense the end of their prime period.

As usual on this particular song, guitarist and head songwriter Pete Townshend’s well-trodden themes of image, identity, and truth are firmly in place. This time, they come with a bona fide autobiographical component to the story that perhaps goes against expectations when it comes to old rockers versus new punks.

The opening to the song about the narrator waking up in a Soho doorway with the policeman knowing his name really happened to Pete Townshend. He’d engaged in several rounds of refreshments with Steve Jones and Paul Cook, both of the Sex Pistols one night. If the press were to be believed, these younger musicians were a part of the new regime that threatened to remove bands like The Who from the rock landscape for good. Regardless, these guys had become friends. This is not to mention the fact that unlike the mythology would claim, punk rock did not spring from nowhere. Townshend was still something of a deity, and rightly so, even if the music he sought out by the late seventies was pretty far away from the scrappy maximum R&B that helped to inspire punk rock. Yet the out-of-it figure in this song who manages to get himself to the tube station, remembering throwing punches around and preaching from his chair like a crazed vagrant is an image that seems pretty far removed from rock-godhood. So, who is this guy, really? Classic Townshend.

These themes of image, identity, and truth are punctuated and made even more complex by singer Roger Daltrey’s very aggressive and four-letter word peppered delivery, the latter element getting a pass on classic rock radio even today, curiously. Once again, the question of “who are you” is as undetermined as much as “who is the narrator”. Maybe it’s the same question. In the title, it’s not even presented as a question at all when you see it written out on the record sleeve. It’s more of a unifying proclamation; Who Are You. Just like punk rock is teaching you, kids, there is no separation; we’re all the who in this song. This definitely works in terms of its anthemic quality. Yet when Daltrey sings it, it really does sound like a demand; who the fuck are YOU? Either way, it can be viewed as a call to action for the audience to answer it for themselves.

These questions of image, identity, and truth are to me the defining characteristics of The Who’s thematic signature. So is the dynamic between Townshend’s intent as a writer and Daltrey’s delivery of the material as a vocalist which often, and intriguingly, work at cross-purposes. In this particular case, the spiritual overtones in the lyrics are undercut by Daltrey’s tough guy persona, which ultimately makes the material more interesting. Apart from the potent juxtaposition between ARP synthesizer, Townshend’s guitar, and (on the studio version) guest keyboardist Rod Argent’s bright piano lines, it’s this friction between writer and singer that makes this song one of the greatest tracks The Who ever laid down and what illustrates the kind of unit they always were; full of conflict, contradiction, and combativeness that all gets poured into their playing. This would be their last hurrah in their original incarnation as the classic rock era that they’d helped to define was beginning to come to an end. But what a send off.

The Who are an active unit today, with Townshend and Daltrey having toured and recorded with a number of guest musicians by now and with plans for shows into 2017, too.

You can learn about their half-century-plus history together at thewho.com.