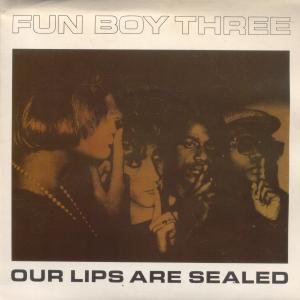 Listen to this track by low-key new wave Specials splinter group Fun Boy Three. It’s “Our Lips Are Sealed”, a single as taken from their 1983 David Byrne-produced album Waiting, their second and (to date) last. The band consisted of singer Terry Hall, guitarist/vocalist Lynval Goulding, and percussionist and singer Neville Staple, all former members of The Specials who left the ska sound of that band behind in favour of a more spare and post-punk oriented approach.

This song is more recognized in North America by the version recorded by The Go-Go’s in 1981. On the US version of the Waiting album, this song was the lead track perhaps because it was such a recognizable song. But Fun Boy Three came by it pretty honestly, seeing as it’s the product of a writing collaboration between Terry Hall and Go-Go’s guitarist Jane Wiedlin. In Britain, this version was a bigger hit than the Go-Go’s’ cut, scoring Fun Boy Three a top ten placement on the singles chart in 1983, in part thanks to an appearance on Top Of The Pops on which they performed the song.

“Our Lips Are Sealed” is more than just a writing collaboration between two musicians of course. It’s also a document of something far more personal, with decided contrasts between the two versions of the song that may reveal a thing or two about the points of view of its writers.

The Fun Boy Three version of this song is decidedly the more downbeat and gloomy of the two hit versions of “Our Lips Are Sealed”. The more cheery and effervescent quality of The Go-Go’s’ version papers over some of the angst found in the song. The Fun Boy Three version goes all in with it, casting a more shadowy, spare, and subterranean feel onto the material. This is a reflection of the kind of sound the band fashioned for itself, which veered away from the brightness of The Specials’ sixties-oriented ska style. But even then, that earlier brassy sound was still marked with a certain heaviness that may reveal what Hall, Goulding, and Staple brought to their former band. It certainly works on this song which is not the happiest of tales, at least depending on how you’re hearing it.

The song came about after a brief liaison between the two writers while on an American tour together in 1980, with Wiedlin’s Go-Go’s opening for Hall’s The Specials. The song can be viewed as a song about cheating, given that by all accounts Hall was in a relationship at the time. Hall crafted the lyrics and sent them to Wiedlin, his way perhaps of expressing his feelings around what had happened between them, and the (perceived or real) reaction to it by others. Being a young and ambitious pop writer, Wiedlin took them up and fashioned one of the most recognizable songs of the era out of them.

When considering the two versions, it could be argued that each one reflects the points of view of each writer respectively. One is sunny and free-spirited, so much so that you can kind of hear a smile in it. It’s the story of a young woman who’s had an experience and refuses to be judged for it. But the other is full of gravity and paranoia about being observed by judgmental eyes. The “pay no mind to what they say” and “it doesn’t matter anyway” is encouragement to a lover in one version. In the other, it sounds like a way of tamping down the keenly felt pressures of judgement inside oneself.

Regardless of how one hears this song across the Wiedlin/Hall divide, the song’s genius is that there really is no one true way to hear it. Both emotional undercurrents are valid. It’s not a deposition. It’s a pop song, and a damn good one. That’s certainly one of the reasons this tune has legs more than thirty years (!) after it was written, and represented so successfully at least two different times during the decade in which it was written. Since then and among other versions, it’s been recorded by 2000s pop starlet Hilary Duff as a duet with her sister, and featured in the Duff movie vehicle A Cinderella Story. The song was selected because to the Duff sisters, it connects not strictly with illicit love affairs, but with the general theme of keeping secrets. That’s valid too, of course.

Fun Boy Three broke up the same year this song was a hit. Hall, Goulding, and Staple would all reunite when The Specials got back together for shows in the late 2000s.

For more information about Terry Hall’s musical career in between Fun Boy Three and his involvement in the reformed Specials, visit this pretty slick Terry Hall-themed fan website.

To check in with Jane Wiedlin, check out janewiedlin.com.