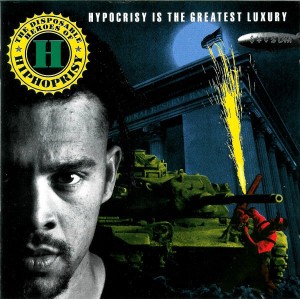 Listen to this track by social commentary-oriented hip hop and spoken word crew The Disposable Heroes of Hiphoprisy. It’s “Television, The Drug Of The Nation”, a notable track that was released as a single and taken from their 1992 debut record, Hypocrisy Is The Greatest Luxury.

Musician, poet, and rapper Michael Franti envisioned a style of hip hop that more directly confronted the social issues of the day, while also combining original grooves with sampled material. As for the latter aspect of the music, drummer and percussionist Rono Tsu was on hand to serve as the crew’s DJ. In addition to incorporating spoken raps in a style previously laid down by hip hop forebear Gil Scott-Heron, Franti also referenced the lingual rhythms of Beat poetry, eventually cutting a record with Beat movement elder William S. Burroughs.

But what of this song, so popular as a soundtrack commonly heard winding its way up and down university dorms in 1992, a time when the Internet wasn’t even a gleam in the eye of mass media outlets? Well, to me, I think this song is less about media, and more about us as consumers of it.

By the nineties, television and mass media in general allowed for the dissemination of information on a scale that was unprecedented, which did not go unnoticed by the culture. Movies like Quiz Show, Wag The Dog, and The Truman Show became a part of the conversation about how media affects perceptions about what is true and what is not. Twenty-four hour news was just gathering steam then, but it sparked some of the same talking points about how media manipulates a story to perpetuate itself rather than objectively reporting on events. It was also a time when cable and satellite TV exploded onto the scene, when shows of various levels of quality could be accessed at any time of day, allowing audiences to escape from the state of the world entirely. We were hooked. But that’s because of the way we’re wired.

Our brains are hard-wired to seek out stories to help us make sense of the world, to connect dots, and to seek out useful patterns in order to derive meaning from our surroundings. But it’s a “garbage in, garbage out” system. In order to serve commercial interests, mass media very often serves up content that is the equivalent of intellectual empty calories; easy to consume and ultimately not very enriching. From here, it becomes very easy for political and commercial interests to fashion compelling narratives that support (or conceal) their agendas wrapped up in these kinds of narratives, even if they’re harmful to those consuming them. If a myth is more compelling than the truth, print (or broadcast) the myth.

In this system, any given set of ideas can be made palatable simply by wrapping them in narratives designed to feel familiar to us, often based on our biases and fears. This enables us go on believing easy falsehoods rather than to allow us to identify hard truths. We then don’t see the need to challenge what we see, and we don’t demand changes in social systems or affect changes in our own behaviour that directly or indirectly cause harm to others. That’s what “drug of a nation” refers to in this song; the need and the mechanism to constantly reinforce cheap and easy narratives to keep us in our place, and to maintain our sense of what we consider “normal” no matter how horrifying that “normal” is or threatens to become.

So, how do we kick the habit? By becoming critical thinkers. We must learn not to blindly take sides along ideological lines or engage in binary thinking around complex issues. We must question motives. We must take time away from mass media to reflect. We must listen directly to other people’s stories and choose to believe them rather than clinging to an ideologically-driven narrative. We must learn from history. We must learn about our political systems and how to engage directly with them. We must be aware of our own biases and privilege around gender, race, class, political and cultural inclinations, sexuality, financial standing, and any other characteristic that affects the way we judge narratives conveyed to us through mass media. In an age where reality TV is dangerously confused with actual reality even at the highest levels of discourse, that’s the only way we’ll ever get the monkey off our back.

As potent as they were, The Disposal Heroes of Hiphoprisy were a short-lived concern. By 1994, Michael Franti had formed a new band, Spearhead aka Michael Franti & Spearhead. You can learn more about Franti’s history and recent movements at michaelfranti.com.

For more about how media can affect our perceptions around important social and political issues, and how we can affect change, check out mediawatch.com.

3 thoughts on “The Disposable Heroes Of Hiphoprisy Perform “Television, The Drug Of The Nation””