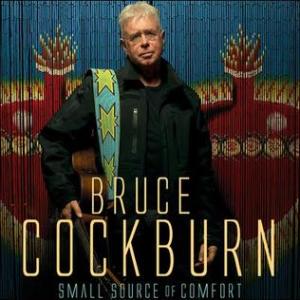 Listen to this track by politically minded singer-songwriter with an eye for the ironic Bruce Cockburn. It’s “Call Me Rose”, the second song as taken from his 2011 album Small Source Of Comfort. Being known mainly for a song about reflecting on what would happen to sons of bitches should Cockburn ever procure a rocket launcher, he’s not generally known for writing songs with a sense of levity. Yet, even that is a misconception. This is the guy who covered Eric Idle’s “Always Look On The Bright Side Of Life” remember, arguably in reaction to his (unearned) reputation for being a bit too earnest. An opening line like “My name was Richard Nixon, only now I’m a girl” might be a bit jarring for many in any case.

On this song, Cockburn really hasn’t strayed from his main songwriting patch which has been about commenting on socio-economic inequity in the world. On this song though, there is a unique shift in perspective that has Cockburn voicing a character, rather than a usual narrative in his own voice. Instead of tales of Nicaraguan villagers making the best of things during a period of political upheaval, or ones about fleeing Guatemalan refugees at the mercy of machine gunners in helicopters (the sons of bitches referred to earlier), we meet a mother called Rose with two little kids living in the projects. The twist is that in a previous life, she had been the aforementioned former President of the United States. How’s that for socio-economic inequity?

But what is Cockburn trying to say here, other than “karma’s a bitch”? Well, I think it has to do with how we as a culture view the idea of power and how it relates to empathy.

The first line of “Call Me Rose” came to Cockburn upon waking one morning, suggesting a fully formed song to him. This was possibly due to the fact that around the time Cockburn wrote this song, there was a minor campaign by the American political right to rehabilitate the image of Richard Nixon who resigned in 1974 when charges of corruption and the threat of impeachment were inevitable. The idea of sweeping that tarnished legacy under the carpet, even in the 21st century and many years after Nixon’s death, was and is absurd.

With Nixon’s name synonymous with the arrogant abuse of power firmly in place, the song manages to rehabilitate the former President in a unique way that is contrary to retroactive praise heaped on his presidency by his political inheritors. Here on “Call Me Rose”, the figure of Nixon finally finds self-awareness by being placed in a life where powerlessness is the order of the day, with the inner strength to carry on being the only asset to hand. This isn’t some liberal revenge fantasy. It’s the start of a discussion about those who are privileged enough to change their circumstances, and the chasm-like gap separating them from those who aren’t. It’s also about empathy; not just for Rose and people in her position, but also for the former Richard Nixon, stripped of his power, and learning the hard way what it is like to truly struggle without the accouterments of privilege. It also stands as a model to understand Nixon’s tier of society today who never have to see the faces of those they’ve harmed through the oppressive policies they create and support.

Cockburn tempers his Christianity with Eastern philosophy here, with the concept of reincarnation tinged with some pretty tough divine love. The lesson here is that often the only way to rehabilitate a person who wields ultimate power is for them to experience the depths of powerlessness as experienced by those who the powerful never have to confront. So, this song isn’t about revenge or punishment in the end. It’s about finding enlightenment under the hardest circumstances by learning about the consequences that they otherwise would have avoided in a life of privilege. In this, the single mother Rose becomes Nixon’s true redemption that no fawning articles in the mainstream press after his death can hope to replicate. We almost hope that when it comes to the spiritual redemption stakes, this really is how it works for everyone’s sake, and that the universe will continue to teach us even after we shuffle off this mortal coil and possible climb inside a new one.

But even if the universe doesn’t work that way, “Call Me Rose” still manages to reiterate how the dynamic between power, empathy, and redemption is the key to a more compassionate society. Cockburn’s amalgam of politics and the spiritual meet nicely in this song, casting aside the idea that his earlier work is about God, and his latter work is about revolution. It’s in a song like this one that we find that in Cockburn’s worldview, there can be no separation between these important human pursuits. Love Thy Neighbour, all this time, has been the most radical political act there has ever been.

Bruce Cockburn is an active musician and songwriter today. Learn more about him at brucecockburn.com.

Also, here is a recent interview with Bruce Cockburn just before his appearance at this year’s Vancouver Folk Festival, including his thoughts on this song specifically, about his recent autobiography, a mention of a new batch of songs now in demo form, and some live performances, too.