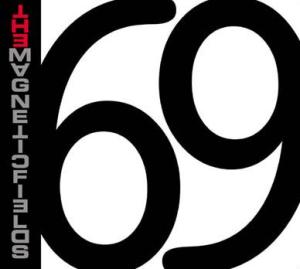 Listen to this track by New York chamber pop ensemble led by arch-songwriter Stephin Merritt, The Magnetic Fields. It’s “I Don’t Want To Get Over You”, a love song (sorta) as taken from the 1999 triple album 69 Love Songs, on which there are in fact 69 love songs.

That record might be looked upon as being the result of a dare were it not looked upon as one of the best albums released that year. This is despite its vast scope or perhaps even because of it. What it established, if there was any doubt, was Stephin Merritt’s seemingly bottomless creative well for creating compact, thoughtful, well-constructed pop songs that draw from many genres and eras. And this was just one of his musical projects during that period! The lowest common denominator here is that they are all ostensibly love songs.

Although that’s another thing with this album. When all 69 songs have been listened to, we’re no further along in understanding love than when we began, and that’s kind of the point. Love is an elusive animal, even in song. But, what is the status of love on this particular song, which is a break up tale that perhaps more of us can relate to than we’d like to admit?

Love isn’t really the object on “I Don’t Want To Get Over You”, even if the narrator thinks it is. It’s about the suffering that love causes after a break-up, or perhaps because of an unrequited love that exists in the mind of the narrator. Like many of the songs on this ambitious (to say the least) record, the meat of this song is found in between love as an ideal, and how we interpret what love actually means to us as we process it in the field, with another person we are drawn toward, sometimes painfully. On this song, we find out that sometimes it’s easy to mistake self-absorption for love. We wonder whether or not at some level, this guy is clinging to a sense of longing because it is somehow important to him as an end itself, outside of any feelings he actually has for someone else. That’s both perverse and extremely common all at once.

It certainly begs the question of what selflessness means, which is the active ingredient in loving someone. How often do we claim selflessness and sacrifice even as we’re forcing a role onto someone else in order to feed our vision of who that person is to us? Sometimes, when we’re honest, what we really want is control, for the object of our affections to behave in the way we want them to behave. We’ve all been infatuated with someone, especially when we’re young, and certainly before we understood the chasm of difference between love and possession. Yet, sometimes we’re caught off guard by our own feelings no matter how old we are, or how many times we’ve found ourselves clinging to something or someone that we shouldn’t.

That’s what this song suggests in the end, with great humour and pathos while it’s at it. That pining after someone usually means creating an image of them and an image of ourselves in our heads around how we want them to be to us in real life. Obsessing about someone after a break-up, or even from afar with no relationship in place, can actually turn into the opposite of love in this respect. Because ultimately it becomes all about serving ourselves, rather than celebrating who a person really is, even if we can’t be with them. Love is tricky that way, and these lessons are hard to learn. Sometimes, we never do.

Luckily with Merritt’s writing, the human damage aspect of love is built right into this song, and on the other songs on this album. Love is never easy or perfect because we aren’t easy or perfect either. And when love seems perfect, it’s usually because we’ve got an incomplete picture. The good news is that this is totally normal, and perfectly alright. Even with a song like “I Don’t Want To Get Over You”, the best part of it is that we see ourselves in that narrative, having all flirted with the idea of being the tragic figure of blueness, reading Camus, smoking clove cigarettes and drinking vermouth like we were seventeen. This isn’t a condemnation, but rather a reminder that we all make the same kinds of mistakes when it comes to love. Sometimes we lose our way. Sometimes too, we learn more about ourselves as a result, preparing us for when love really does come to call.

Magnetic Fields is an active project of Stephin Merritt, along with other musical pursuits. You can track its movements and news about Stephin Merritt at houseoftomorrow.com.