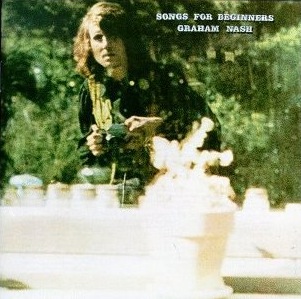 Listen to this track by former Holly and one-third of Crosby, Stills & (yes) Nash, Graham Nash. It’s “I Used To Be A King”, a key track from his first and arguably best solo record, Songs For Beginners from 1971.

By then, maybe the term “beginner” wasn’t pertinent to Nash. True, this was Nash’s first foray as a solo artist, transplanted from Manchester to sunny California after having left his band The Hollies in the late sixties. But by this time, he was well established as a native of SoCal, and no stranger to the scene. He was riding pretty high with CSNY, with this record being his next project after the mighty Deja Vu completely solidified the success of the band. Also, Nash had a lot of help on this record from musicians who weren’t exactly babes in the woods either, with members of the Grateful Dead, Traffic, The Flying Burrito Brothers, and a couple of his regular teammates in Neil Young and David Crosby pitching in.

So, what’s all this about “beginners”, then? Well, I suspect the answer to that question had less to do with musical proficiency, career experience, or the road scars that comes with all that. The fact was that by 1971, Nash was starting again for other more personal reasons.

By now, it’s a fairly well-known piece of rock lore that Nash had a high-profile relationship with Joni Mitchell, with whom he shared a very, very, very fine house. Like Nash, she was a transplant to Southern California from another country. So, it may be easy to predict why they gravitated toward each other. But, their relationship ended and quite abruptly. Her Blue album that also came out around this same period is the more famous statement most closely associated with their break-up. Even if the songs on that record aren’t all about her broken heart, it is considered to be a cornerstone in the whole “confessional” singer-songwriter tradition, a term Mitchell was never too crazy about.

“I Used To Be A King” is generally regarded as Nash’s point of view on the whole episode, along with another song on this album, “Simple Man”.  This is a song of survival, not of bitterness or self-pity that creeps into an earlier “kingly” song Nash penned with The Hollies, “King Midas In Reverse”. It’s a song that confirms that even after a relationship is over, respect and love still remain. It’s a song of wistfulness of a love now gone and forever cherished in memory, and of resolve that one’s heart will be ready the next time love comes to call. It contains complex emotional currents that include “it’s alright I’m OK how are you?” flowing against “no one’s going to break my heart again”. It is a song of sadness and triumph all at once.

The reason that the confessional school is reviled even by many of those songwriters who are associated with it is because it’s looked upon as being wimpy, or self-indulgent in a way that more abstract songwriting is not. I’m no songwriter. But, I know the difference between a maudlin pile of mush and something that tells the story of the listener as much as it does the writer. It strikes me that it must take a tremendous amount of writerly precision to keep a song like this from drifting. In this respect, Graham Nash is a exemplar on this tune. It’s about Graham Nash. But it’s also about anyone who’s ever been in his position, all at the same time.

In “I Used To Be A King”, Nash doesn’t cut corners on his emotions or paint in strokes of black and white. Resolve and confidence live right beside a sense of betrayal, failure, and hurt, with neither colour in the spectrum dominating by the end. In this, the “confession” is not about innocence or guilt. That would be an easy and far less effective route. This song is about honesty and the bravery it calls for from the writer for the benefit of anyone who’s going through the same things he is.

We all have to begin again sometimes. That takes guts, even when we don’t always have the words to express it.

Graham Nash is an active songwriter and touring musician today, and with a new solo record coming out in the spring, called This Path Tonight, which deals in part with the dessolution of his marriage of 38 years. You can read about it and hear the single “Encore”, another song about being a beginner again after a relationship ends, right here.

To learn more about Nash and his varied career in several succesful musical ventures, I heartily recommend his autobiography, Wild Tales, which talks about his time in The Hollies, with CSN, and with Joni Mitchell, too.