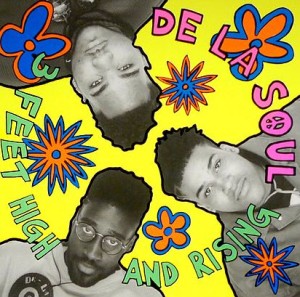 Listen to this track by three-man “hippie” hip hop crew from Long Island New York, De La Soul. It’s “The Magic Number”, a single as taken from their 1989 landmark album 3 Feet High and Rising. That record would stand as one of the signs that hip hop and rap were branching off in different directions by the end of the eighties, not only in the way that it was musically structured and textured, but also in terms of presentation and persona.

As the gangsta rap of NWA, and the politicized “CNN for black people” approach of Public Enemy began to make headway by that same era of the late eighties, this record was full of bounce and whimsy, referencing source material outside of hip hop’s traditional wheelhouse, including a sample from a song by Johnny Cash  (“5 Feet High And Rising”) found on this track that also suggested a title to the album. Despite the off the beaten track musical choices it represents, 3 Feet High And Rising is commonly cited as a record that served as a bridge from the 1980s into the next decade of the 1990s, and a leap further into the mainstream for hip hop in general. Not bad for a debut record.

As innovative as the record is, De La Soul adhered to many of the tenets of the genre that still can be found in hip hop today; self-reference, self-awareness, and breaking down the fourth wall to remind listeners that that are listening to a record made by artists. The innovation part of the equation on this song is connected those ideas to some things that is found in music of all kinds; mystery and wonder!

The “3” in this song is the three men in De La Soul. As much as that might seem like a simple act of self-proclamation which is common in hip hop, this tune goes beyond that. This track is about the delicate dynamics that exist between artists who mysteriously find each other (“somewhere in this hip hop soul community …”) and are granted the opportunity to collaborate.  To me, the lyrics of this song always seemed to suggest a sense of wonder around things that can’t be easily defined when the artistically sympathetic get together.

In this song, when three specific people get together under the De La Soul artistic umbrella, a kind of magic happens that is then translated into a unique sound that would not be possible should any of those three be absent. With three distinct personalities come the unexpected results that might not have emerged otherwise, from Bob Dorough’s Schoolhouse Rock reference to samples that quote the importance and the spiritual affinity that comes with the number three. Three has a mystical quality that can’t quite be accounted for, kind of like music itself.

In this, the audience is let into that sense of wonder about the act of making music. Part of the show in this song is being invited behind the curtain and into the world of the people who made the music we’re hearing, who are just as enthralled by it as we are. Whether we’re artists or audience, our attraction toward rhythm, melody, texture, and tone can’t be fully accounted for by any universal analysis. The appeal that those elements reveal to us when combined in seemingly endless ways transcends genre, culture, and era. It is interconnected to human experience itself, it seems. We are driven to make and enjoy music with likeminded people. We are motivated to seek it out from the artists we love, and to cherish it when we find it. No one really knows why or what the biological imperative is, if there even is one.

But, it’s not just about science anyway, I suspect. It’s more like alchemy. Music turns experiences, perceptions, and passions into something we can connect with and share with each other, greater than the sum of its parts. It really is as close to magic as we are likely to get.

“What does it all mean?”

Wonderfully, we don’t always know. And yet at the same time somewhere inside of us, we do.

De La Soul is an active crew today and still with the original three members; Pos, Dave, and Maseo. They’ve recently embarked on a Kickstarter campaign to fund their next album. You can learn more, and donate too, on this page right here.

[UPDATE: June 14, 2016] De La Soul have reached their goal in financing their new record. It’s called And The Anonymous Nobody, to be released on August 26, 2016. For more information about the new record, which features contributions from Snoop Dogg, and Damon Albarn, take a look right here.