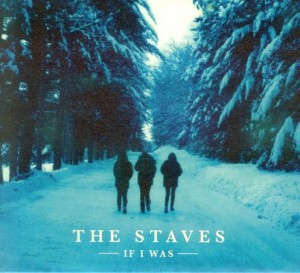 Listen to this track by sisterly Watford, Hertfordshire trio The Staves. It’s “Black and White”, a single as taken from this year’s If I Was, their second full length record. The band is led by the voices of three sisters; Emily, Jessica, and Camilla Stavely-Taylor. Shortening their name for the stage one night on the sign-up sheet at a regular open mic night, the three sisters became The Staves.

This second album comes after the release of several EPs, and an eventual debut record in Dead & Born & Grown in 2012 (produced by two generations of famous Johns’ – Glyn and Ethan!). In the middle of all that, the band served as an opening act to The Civil Wars and Florence & The Machine, and provided back up duties on recordings by Tom Jones, and Fionn Regan. Additionally, The Staves gave performances at SXSW that exposed them to an American audience. They also supported Bon Iver, which led to Justin Vernon producing this record, capturing their harmony-centric feel that bypasses traditional British folk-rock, and instead connects with a sound that is more transatlantic instead.

There’s a sense of menace in this song, which on first listen may not be immediately apparent, just because the combination of voices is so compellingly beautiful. There is also something to be said for local music scenes that encourage young musicians to create this kind of alchemy together, which is certainly the case here, with a single venue serving as a platform for an international path to success.

The venue in question was The Horns, a local pub in Watford that is not a part of a corporate chain, and in fact encourages a mixed crowd of patrons and musicians to gather as a community. This is where the band was born, playing open-mic nights along with other local musicians who provide the community with an alternative to going to the pub just to get hammered (although I imagine that happens, too!).

Musical movements of the greatest import have always been built on community-based venues. You can make your own list of the more famous holes in the wall that have produced some era-defining acts. There are advantages to learning your craft in front of an audience who know you, or at least share a community with you. When in an environment like this, you’re free to work out your craft by trying out different ways to present yourself and your ideas, and maybe above all, add to the voices of other musicians that help to bring your own talent into focus. Having roots in a community of musicians and local audiences certainly helped the sisters when they recorded with Vernon in Wisconsin, a place where no one knew them, and where surroundings were unfamiliar.

The eldest Stave, Emily, explains the importance of The Horns venue in this interview conducted by Brightonsfinest.com:

… The place (The Horns pub) that we started was the only place in Watford where you could go for music. … there are ancient people there, there’s underage kids trying to sneak in, there’s a whole mess of people there, and everyone is there because they want to hear live music and to be in a nice atmosphere where everyone is cool. We really liked that, that’s how our parents’ parties were when we were kids…  The crowd (at the open mics) were always appreciative and encouraging of new acts; it was a safe place to start, with all our mates… we were quite lucky. It wasn’t like: ‘is anyone going to boo us, or talk over us’. It was quite respectful. (read the whole article)

This is what allows bands, and the music made by them, to grow; a sense of place that allows artists the freedom to create something honest. If there is a hidden ingredient to be heard in this song, then maybe this is it. There are many stories about the bloodthirsty nature of rising to the top as a professional touring act, surrounded by sycophants, opportunists, and crooks. But, I think a lot of people forget that there are stories of places like these, too, where performers and audiences to gather around the mutual love of making and listening to music together, and adding some vitality to their communities as a result. As local venues are under the constant threat of closure in many cities across the globe, I think it would do our wider culture good to remember how important they really are.

The Staves are a rising act today, with an already impressive resumé. You can find out more about them at thestaves.com.

For more about this particular song, check out this video of The Staves playing this song live, recorded at none other than Konk studios.