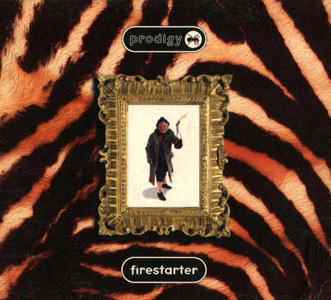 Listen to this track by Braintree, Essex crossover hit makers and controversy-stirring dance floor urchins The Prodigy. It’s “Firestarter”, their monster dance hit that scored top ten placements on the British pop charts, and serving as the first single from the band’s 1996 record Fat Of The Land.

That album was a breakthrough into the mainstream for the burgeoning dance scene that had existed in various forms in Essex for many years. By the mid-to-late nineties, it provided something of a stylistic ballast during the height of the Brit-pop period. The Prodigy reminded music fans that there was more on offer when it came to making impactful music than guys with guitars, and that there was more to dance music than sanitized beats and thin synth riffs.

The Prodigy were dogged with controversy over many aspects of their presentation and their content. With this song, maybe controversy was stirred up because of the video, and the meaning of what a “firestarter” really is, too.

Controversy aside for moment,  the reason I think that this song, and the album off of which it came, was so popular is because it provided a series of varied musical textures that Brit-pop guitar bands didn’t provide, while still managing to reflect the guts of rock music which so many guitar bands were trying to capture in a new paradigm. The first time I heard this, I didn’t really process it as dance music. To me, it was punk rock. Maybe this is because it sampled the Breeders. But, there was more to it than that.

At least a part of this reaction of mine had to do with frontman Keith Flint, first because of his bolshy Essex-accented delivery, and second because of his seemingly demented persona as featured in the video for this song. The video was so disturbing to some that it was ruled that it was only to be shown after “the watershed“, which is the British regulation for more adult oriented content after nine p.m. This tempest in a teapot over the video seems ridiculous now, of course. Nothing specifically disturbing even happens in the video. It just had something of a violent vibe to it, with the phrase “firestarter” being evocative of burning buildings and people ala the Stephen King story of the same name. It seemed to be a song about destruction, and was widely treated as such.

I think it’s about the opposite of that, personally. Not too many dissenting critics took into consideration that “fire” as a concept isn’t necessarily about destruction, or pain, or murder, or hell, or whatever. Fire is about creativity, too. Think about Prometheus in Greek myth. And about “holy tongues of fire” in the book of Acts in the Bible. Fire is a classic double-edged sword in storytelling. It can be destructive. But, it can be used as a literary device, emblematic of a force that sweeps away the old to make way for something new. It can be about inspiration and about clean slates. That’s what I think the band were really driving at, and what really makes this song as punk rock as it is.

As Flint spits out “I’m the firestarter!” all punked up and full of feral and wide-eyed fervour as he is in the video, he seemed like some Anti-Christ figure to some, maybe. It followed that a lot of people just took it all at face value. But in the song, he also asserts “You’re the firestarter!” which seems to undercut all that, not that too many people noticed. As such, this tune is actually pretty empowering. It’s the dance-rock, punk rock expression of Ghandi’s “be the change”. Or at least that’s certainly one fair interpretation, and certainly an example that makes it important to always question the wisdom of most decisions that lead to bans on things in the name of public decency.

Of course, The Prodigy would go on to release “Smack My Bitch Up”, which proved to be even more of a sticky issue for them. Even that was a song about getting things done, and “doing anything intensely”, according to the band’s creative lead Liam Howlett, and not about domestic violence as it seemed. Maybe that’s a metaphor with fewer outside references than fires and fire-starting. But, it certainly proves that language is a powerful and, yes, incendiary tool.

The Prodigy are an active musical unit today, having put out their most recent album The Day Is My Enemy earlier this year. You can follow their recent moves at theprodigy.com.

One thought on “The Prodigy Play “Firestarter””