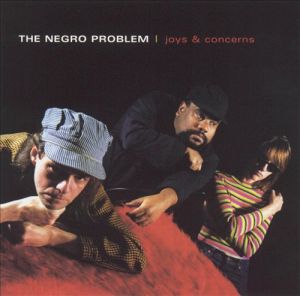 Listen to this track by Los Angeles folk-chamber-pop vehicle with a moniker laced with irony, The Negro Problem. It’s “Bleed”, a key track as taken from their 1999 album Joys & Concerns.

“The band” is more of an artistic vehicle for songwriter Mark Stewart, professionally credited and known as simply “Stew”. Being black in LA, his decision to record music that is inspired by more by Jimmy Webb than by Sly Stone is a rebellion against the undrawn lines of demarcation around who makes what kind of pop music and with whom — specifically if you’re not white.

Yet, Stew is a part of a continuum of music made in that city, most notably by Arthur Lee who made some of the same stylistic moves as Stew over thirty years before. Along these lines, maybe the name of the band isn’t all that ironic after all, or at least not in the way that one might think. That aside, this song is hinting at themes that go beyond all that still, out of the realm of musical divisions and into one of human foibles.

This tune hooks into some pretty common human experiences and impulses that make the musical packaging something of a secondary concern. It’s a reminder too that sometimes the mood and tone of a song can be all we need to understand what we’re hearing. Sometimes, that’s the more rewarding listen, which is the case here.

The theme of need is suggested by some of the individual lines, with the hint that the one speaking is unworthy even in his own eyes to have those needs met, or even that he is a destructive force in the life of the one being sung to; “don’t forget to mention your friend that I need work/don’t remind her I’m a jerk.” It suggests that common scenario that has one person drawing resources from another, with the costs of that never paying back any kind of dividend. This song is full of these kinds of sentiments, with cut hair and empty promises, “stumbling around and needing”, and the possibly disingenuous opening line: I don’t bleed you/I just need to see you. The lyrics suggest the idea of human flaws and selfish impulses and how they affect the way we process what we need from other people, often resulting in relationships based on cycles of dependency instead of mutual care and benefit.

The music around all of these lyrical impressions is beautifully sombre, with acoustic guitar and airy keyboards setting the scene perfectly for the themes and impressions evoked by Stew’s voice. Even without lyrics and voice, the music itself suggests that this is not a happy story with happy characters at the center of it. Beyond that, I’m sure there’s a story here, possibly taken from the life of the songwriter. But, maybe the details of it aren’t all that important in the end, which is about how we apply what we’re hearing to our own experience.

What’s left for me on this song is the idea that sometimes we use each other for our own selfish ends, even though at heart we’re not bad people, or even that we have bad intentions. What is most sobering of all is the idea that selfishness, to one degree or another, may be hard-wired into each of us, and that at times we all bleed those we care about in some form or another, often without anyone realizing we’re doing it, including ourselves.

For more information about Stew, have a read of this article that was conducted around the time the album Making It came out under The Negro Problem name in 2012 after he had success as a playwright and stage composer (Passing Strange, later filmed live on stage by Spike Lee), and after a break up with Negro Problem collaborator and lover Heidi Rodewald. The article also touches upon the idea of defending one’s artistic influences and taste, and essentially one’s individuality apart from their racial connection, which may be the “problem” Stew was alluding to all along when he named his band.