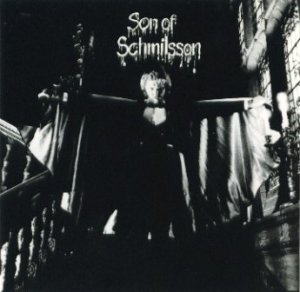 Listen to this track by golden-throated singer-songwriter and soon-to-be Rock ‘n’ Roll Hall of Famer Harry Nilsson. It’s “Turn On Your Radio”, a deep-cut from his 1972 album Son of Schmilsson. The record is a self-consciously-titled follow-up to his Nilsson Schmilsson album, which is his biggest selling record to date.

By 1972, Nilsson had scored a number of successes, with seven records behind him, songs on mainstream movie soundtracks, and songs of his covered by other artists. Also, Nilsson had made a lot of friends by then, and had won a number of celebrity fans too, some of whom helped him realize his musical goals during the sessions. This included two Beatles — Ringo Starr (credited as “Ritchie Snare”) on drums, and George Harrison playing his signature slide guitar. Later on of course, he’d have another Beatle in his inner circle; John Lennon, who helped Nilsson drink a lot of Brandy Alexanders at the Troubadour Club. But, that’s another story!

Beyond that, this song illustrates the magnitude of Nilsson’s talent by then. He was able to strike a balance that few songwriters were able to do, between sumptuousness and simplicity. Lyrically too, this song seems to hit two chords at the same time.

This tune is deceptively simple and unadorned lyrically speaking. After all, the idea of turning on your radio can be taken literally; turn on your radio and listen to my song. That’s what all artists want in the end, right? But, the subtext of turning on your radio goes beyond artists and radio play in this song. It’s about being in tune with our own existence, and becoming more self-aware and in tune to what’s going on around us while we can, because life is short, uncertain, and always moving toward the future. In the middle of this, none of us know where we’re going, really. And we all hope the wind that’s blowin’ helps us all carry on. We all want those we love to hear our song while we’re still around to sing it, and to remember it after we’re gone. We want to hear their songs while we can, too. We want our lives to have some lasting significance.

It would have been easy enough to arrange this song into a grandly filigreed and towering anthem. After all, the idea of existence, connection, and meaning is a pretty grand area of interest, and it’s not exactly untrammeled territory when it comes to singer-songwriters. But, Harry was a singular voice. That central four-bar acoustic guitar/piano figure is all he needs to catch our attention. His call to embrace life and all its uncertainty in this song is a quiet one, and almost childlike in tone. This desire to be heard, to hear the voices of others, and to find meaning in one’s life as a result is almost always an unassuming one. If there was one thing Harry understood best, it was knowing how to match important ideas to the simplest of musical forms to bring them down to earth. This is my favourite example of his sweet and simple ability to do this for listeners in a way only he could.

Amazingly at the time of this writing, Harry Nilsson is not a Rock n’ Roll Hall of Fame inductee — yet! But, there is a movement to change that this year thanks to a group of musicians, family, and friends of Harry Nilsson himself. There’s even a theme song!

You can listen to that song right here!

If you’re a Harry fan, this is your chance to spread the word by sharing the video in your social feeds! For you hashtag savvy people, here’s the one to use: #HarryInTheHall

For more information, check out harryinthehall.com.

Turn on your radio, everyone! Let’s get Harry in the Hall!

4 thoughts on “Harry Nilsson Sings “Turn On Your Radio””