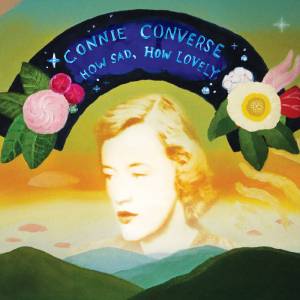 Listen to this track by New Hampshire native transplanted to New York City and singer-songwriter progenitor Connie Converse. It’s “One By One” one of seventeen home-taped songs she  recorded sometime at the end of the 1950s. After many years of awaiting discovery, this song and Converse’s other material was commercially released in 2015 on the album How Sad, How Lovely.

Converse’s songs and her general approach to making music — by writing, singing, and playing it herself — have become cited as the earliest example of the singer-songwriter genre. Now, that claim is perhaps tenuous if you want to take it apart on a musical level. Lots of people were writing their own songs and singing them by the fifties. But, when connected to the scenes in the late sixties and into the seventies, maybe you can see why this claim has been made, so common are the threads found in her music when compared to, say, Judee Sill, Tim Hardin, Bridget St. John, or Nick Drake. Like those writers, Connie Converse dealt in contemporary themes while referencing traditions of the past, along with a love of imagery and wordplay that goes beyond the confines of pop music of her times. In Converse’s case, it was early twentieth century parlour songs, folk ballads, hymns, and cowboy songs.

But, like some of those examples given earlier of singer-songwriters, Converse had a limited body of work due to its lack of commerciality. And in addition to that,  there’s a certain amount of mystery surrounding the fate of Connie Converse.

Hailing from New Hampshire as the daughter of a Baptist minister and temperance advocate, Converse eventually made her way to New York City to pursue a music career. Her love of literature, her drive to invent and create, and her outspoken nature demanded an outlet. She channeled all of this into her songs, which have the feel of music that is much, much older than it actually is. Her songs recall a kind of Stephen Foster level of accessibility while also recalling Foster’s vintage. They have a literary quality that revealed Converse’s attraction to books and narrative poetry, not to mention a vehicle for Converse’s dry sense of humour. New York City seemed the perfect place for her to bring these influences together, not to mention being at the center for music publishing, and a burgeoning coffeehouse and folk club circuit.

She spent the fifties writing songs and accompanying herself on the guitar, living in Greenwich Village while those vital music and poetry scenes were beginning to emerge.  She took an office job to support herself, and otherwise fell in with a group of young musicians, which included Pete Seeger of all people, who fed her enthusiasm for songwriting. With the help of a friend, and a Crestwood 404 tape recorder, she put her songs down on tape that would eventually find a release this year after spending so long as a buried musical treasure. Eventually, she appeared on Walter Cronkite’s CBS Morning Show. It would be her only appearance as a professional musician. In 1961 after having had enough of getting nowhere as a musician in New York, she moved to Ann Arbor, Michigan and took up a position as an editor at a college journal. In 1974 just before she turned 50, she packed up her VW bug and informed her family that she was going off somewhere else to start a new life.

Connie Converse has not been heard from since.

Her songs and their origins seem almost as mysterious as her eventual fate. They are full of melancholy, humour, beauty, and tragedy that would come into the spotlight as viable and commercial music decades after she had written them. This one in particular is resplendent in its imagery and emotional gravity. It is a nocturnal landscape of lost love, memory, and loneliness. The rough nature of the recording only goes to make this song sound all the more spectral in its unadorned beauty.

Wherever she is now, she must know now that her muse has been proven, as evidenced by many songwriters and singers that followed her, and followed that same melancholic and poetic thread that she found decades before.

How sad. How lovely.

To learn more about Connie Converse, read this article from The Awl.