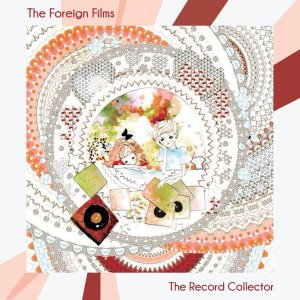 Listen to this track by Hamilton based and cinematically monikered pop-psych collective led by one Bill Majoros, The Foreign Films. It’s “Empire Of Night”, a key track as taken from the third side of the upcoming full length album, The Record Collector, due in early 2016.

Majoros’ interest in a wide spectrum of pop music is well documented with his work under The Foreign Films banner. This was initially apparent with 2007’s double album Distant Star. It continued to develop in the ensuing years, with various singles and EPs that revealed a love of all kinds of pop music that certainly included British psych and sixties guitar music. But, it also included girl group pop and classic soul music too. The key to Majoros’ success has always been about translating a passion and enthusiasm for these strains of music into something integrated and new.

Working with a number of musicians, including singer-songwriter Kori Pop who is featured in lead vocal spots through out, Majoros describes himself as being akin to a musical mad scientist, with the creation of the new record being less about simply getting the songs down on tape, and more like that of musical alchemic process, mixing elements together as contributed by everyone he works with and awaiting the x-factor for each song for them to become what they need to be.

Part of what that meant was taking disparate elements and influences across the pop music spectrum, and across the decades in which they were fashioned, and juxtaposing them. This is particularly noted for side 3, along with the journey toward the completed album.

Each side of the double album represents a time period of approx three months. The album, literally, was a year-long experiment in songwriting starting on my birthday. Side 3 is a juxtaposition of diverse influences I hold dear! The music I’ve loved growing up has subconsciously made its way into these songs; sixties British, French and West Coast Pop, Vintage soul, seventies singer songwriter and a touch of Art/Prog and even New Wave.

This is the advantage that the 21st century songwriter and record producer has; history. The work of so many other songwriters and record makers allows modern artists to create new music by building upon a solid historical foundation to support new musical architecture. The exercise in this case seems to be about working within a range of styles and features that perhaps shouldn’t work well together, but do anyway because of how well integrated they are at the production stage. It’s not like this template for success is just limited to the 21st century. Artists have been making music this way since it was possible to make it, learning from what enriched them as musicians and fans, and using that currency to add to the collective musical treasure trove themselves.

But, the technology and the unprecedented access to a vast library of sounds and performances it enables certainly is unique to our times, providing a view from the top that hasn’t been available before in quite the same way. With the ability to release a record a side at a time influenced by several eras of pop music, for instance, which is a plan of action that was historically not available to many of his influences, Majoros also invites listeners into his process in a way that is also unique to our times. This affects the way that listeners take in what they’re hearing more as a journey and less like a simple transaction. This is the way we experience our favourite records as a whole anyway. When we put them on and listen to them, it’s like taking a trip across a landscape that we take in gradually as we go, allowing us to reflect on where we’ve been once the journey is over. That feeling is what separates the good from the great when it comes to our favourite music. That’s where the magic is.

But, as I am so fond of saying, the process would mean nothing without good writing and good performances that make that act of musical alchemy into something worth the time. Majoros’ approach to musical texture is matched only to his interest in thematic content in the lyrics that is also about juxtaposition of a sort, and of a very relatable variety, too. This tune “Empire Of The Night” is a classic study in light versus darkness, full of striving toward the former while surrounded by the latter, ultimately optimistic but never trivializing the presence of sorrow and suffering. In this respect, the idea of an Empire Of The Night is pretty easily understood. Like the best in pop music, it connects to human experience to be understood by artist and listener alike. The magic can be found here, too.

You can currently download sides Two and Three of the upcoming double album right here.

Otherwise, you can get your Foreign Films fix as far as news and community discussion on the Facebook page.