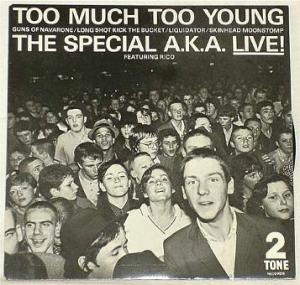 Listen to this track by first tier of second wave ska outfits The Specials. It’s “Too Much Too Young” as featured on their 1980 EP of the same name. It was released in January of that year, quick to follow up their self-titled record that preceded it in October.

This song was featured on that release as well, with a slightly slower  and more languid tempo. With this version, recorded live in front of an audience at the Lyceum in London, the song is amped up in every way, full of the kind of on-stage energy for which the band were known by this time, clocking in at just over two minutes. The result was a number one showing on the UK singles chart in February, being the shortest song in the UK to hit a number one spot during that decade.

As with much of their material, The Specials drew inspiration from the Trojan label and the music associated with it coming out of Jamaica in the mid-to-late sixties. Head writer Jerry Dammers based this song around some elements that can be found on the 1969 single by Lloyd Charmers “Birth Control“, adding a bit of contemporary content of his own in this new track that took some of the themes of the original, and put something of a political spin on the proceedings in so doing. So, how does a jaunty ska track become so political?

The second wave of ska in Britain was all about conflict. This is the kind of territory that The Specials mapped out very well, arguably better than any other band on the scene in that era. Even musically, they were harder edged than most of their contemporaries, matching their stark urban lyrical imagery with a more aggressive take on ska as a form. Where The Beat and The Selector interspersed their sounds with soul music and new wave influences which served as an emollient to the punkier sides of their music, The Specials were grounded in a tougher, angrier sound, even if they were still interested in music for audiences to dance to as well. As crowds skanked to this tune, maybe they recognized some of the same narratives in their own lives at the same time. This was political music, which is what distinguished it from the earlier work of their influences.

A lot of the conflict and abrasiveness they created also had to do with how well the band created contrasts within their music in general to best express that conflict that is at the heart of their identity as a band. The loping basslines, skittery drums, the bright organ licks, and off-the-beat guitar comes straight out of the Caribbean, from where several members of the band originally hailed. But, lead singer Terry Hall’s petulant delivery that is full of acidic disdain was pure punk rock. The music itself is an odd pairing in theory, even structurally speaking. There are disparate rules for traditional ska and rock music. They don’t work in the same way. Yet, it’s the contrast between these musical styles that makes this song work so well, with sounds thrust together much like the communities that played them were thrust together by the late seventies and early eighties when The Specials were growing in stature in the Midlands of England. But, how does that cauldron of cultural forces come out in this song? What’s  the real story here?

Well, I think it has to do with how life in working class and working poor Britain was being portrayed by the mainstream at the time, and how it is still portrayed today, where Labour capitulation to the austerity-mad Tory party on welfare reform is apparently a thing. It’s that caricature of the poor woman, getting knocked up and living off of the state that is being alluded to here. As tired a trope (and as largely untrue) as it may be by now, it was certainly a common narrative in the 1980s, a time when it was initially spun. The narrator in this song is a frustrated would be paramour, disgusted by her life, and more disgusted by how it meets the criteria of all of the criticisms that reactionary political discourse would place upon her, and those around her living in the same community; chained to the cookers, eating currant buns for tea, and unthinkingly creating more mouths for the state to feed, with the fear that soon, population control by the state will need to be ushered in.

That pretty heavy for a number one single, right?

Such was the state of things in Britain by the early 1980s, with unemployment, urban violence, and what appeared to be the beginning of what we still see today, both in Britain and in North America; a distrust of the poor at the political level, shaping all kinds of policies to follow to punish those who depend on the state. To me, the narrator of this song could be of the classic untrustworthy sort, not really concerned about the things he says he is, but rather about how these social forces affect his own life; with his object of affection “married with a kid when you should be having fun with me”. Despite their two-tone approach around which they also fashioned an identity, this song is rooted more in shades of grey. Because, he also could be the voice of one who very much cares about how his community is perceived by the outside, even if his criticism is misdirected. Ultimately, this is a reflection of that same conflict that is at the heart of the music of The Specials as a whole, where even in places where unity and coming together of black and white was a call to arms, there are blurry lines to be confronted when it comes to who’s to blame for the state of things even on the ground in the community. Perhaps it’s this which made that call for unity so important, remaining so today in a world where political manoeuvring at the expense of the poor continues in earnest.

After several eras of line-ups, The Specials are a going concern today, with many of the original members reinstated since 2008, including Terry Hall, Horace Panter, Lynval Goulding, John Bradbury, and Roddy “Radiation” Byers. You can catch up to them at thespecials.com.

And if you think that they’ve lost their angry edge after over thirty plus years as a band, check out this video of The Specials on stage, during which a fan is ejected from the show for throwing a beer can at the stage. Warning: frontman Terry Hall uses language to express his displeasure that your local clergyman and/or your Mum might not be able to get behind.