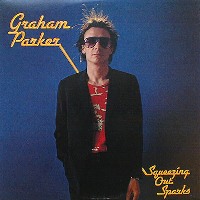 Listen to this track by London-born, Deepcut Surrey raised singer-songwriter and original angry young man Graham Parker, along with his crack team of pub rock compatriots, The Rumour. It’s a hot should-have-been-huge single “Local Girls”, featured on Rolling Stone’s retroactively appreciative top 500 albums of all time record Squeezing Out Sparks, produced by none other than Jack Nitzsche, arranger and one-time co-orchestrator to Phil Spectre in the 1960s.

Before his career as a musician with an unbeatable backing band on the pub rock scene in London, Graham Parker was a wanderer, travelling to various places, and working different jobs while his ambitions as a full-time songwriter and touring musician were percolating.

That’s why I think “Local Girls” is less about a disdain for women at bus stops, and more about finding a personal sense of location for a songwriter from a small town.

By the time he was gaining momentum on local scenes in London, Parker was a singular and much-admired figure among fans and musicians. Here is a guy who basically invented a template for a singer-songwriter to be the antithesis of that for which they had come to be known at the time. Parker was not a sensitive and touchy-feely presence in his songs like Jackson Browne, Dan Fogelberg, or David Gates. He was aviator-shaded and acid-tongued instead, with a notable swagger in his delivery that was laced with a hint of lip-curling disdain. “Don’t you think that I’m the one your waiting to see?!” he seemed to say, overtly on this song, and to varying degrees on other tracks, too.

That template of the fiercely intelligent cynic singer-songwriter that he modeled and defined so well worked for many of his peers during that era, maybe more so than it did for Parker himself in the long run. But to me, “Local Girls” is an important key to understanding where Parker was coming from, and had come from, where all of this is concerned. It is the sound of a guy who had travelled around a bit during his sojourn as a young man, doing various jobs and making music only part-time, and perhaps expanding his mind as he did so. But he was also a guy who had grown up in a sleepy suburb of Deepcut in Surrey, and surrounding Frimley and Camberley (I used to work in Frimley!). These are provincial and culturally homogeneous regions away from the bustle of cosmopolitan London. “Sit by my window and look outside/Wonder why the sun don’t shine on me …” takes on a whole new meaning in a place like that when one is an ambitious person with big ideas in a place that’s nice enough, but that doesn’t always invite too many ambitious ideas outside of the expected daily routine.

This song is about getting out of all of that, and railing against the attitudes that feed it. A line like “Don’t ever leave a footprint on the floor” is laced with irony, a pushing back against the parochial attitudes that that everything has to be in its place, a point of view that is all too pervasive small towns everywhere. It’s not the local girls he really has a problem with, then. It’s the limited vision that they represent; close-mindedness by being “straight” in one’s thinking and expectations of life, that every man’s place is in the army (nearby Aldershot in Surrey is a major training bastion for the British army, along with Deepcut’s own Princess Royal Barracks), or with mothers who “know nothing but hate”. It’s a classic example of a song about not fitting in and not wanting to fit in. It’s about being stuck in a place that doesn’t reflect one’s values, and being put off by those around who hold opinions and priorities that don’t jibe with one’s own. It’s bile hides a deeper sense of isolation, of hoping for something better when it comes to one’s home surroundings. This makes that anger and disdain you can hear so clearly in this song completely honest, moving it well beyond an image or some kind of appropriated marketing ploy to win over audiences who were weaned on punk rock by 1979.

Parker would eventually make his name for himself in London during a time when one didn’t have to have their first single and first album smash the charts in order to have a career. This was his fourth record in three years! He would famously have issues with the whole fame game through out his career, overshadowed by peers who cite him as an influence even today, and having his releases scuppered by label jiggery-pokery. But, this is a song to be understood as one that has its author reflecting on what he left behind, having let it go by then; “don’t bother with them, they don’t bother me”. Graham Parker was a success by this time, even if it was a modest level of success when compared to some of his contemporaries. He was comfortably based in London with one of the best backing bands of the day behind him, and signed to a major label with distribution into the States. But, you can detect the fingerprints of the person the writer had been as he’s depicted in the song, disgusted with the narrow-mindedness he saw around him, and with the rebellious drive and ambition to escape it to find something new instead.

That pretty much encapsulates the rock ‘n’ roll quest myth as a whole, doesn’t it?

Graham Parker & The Rumour are a going concern today, having reunited in 2012. They have a new record out called Mystery Glue, released just last month. The vinyl release of the new album is coming next month on July 14.

You can find out more about it, and about tours and other stuff at GrahamParker.net.

For an overview of the man himself, have a read of this 2001 interview, done around the time his old hometown got a shout out on his Deepcut To Nowhere release.