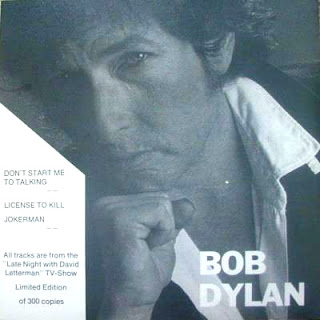 Listen to this track by mercurial singer-songwriter who likes a good jam as much as the next guy, Bob Dylan. It’s “Jokerman” a cut that is featured on his 1983 record Infidels.  On that album, the song is presented in a tasteful reggae-seasoned arrangement. But, Bob being Bob, when it came time to play it on David Letterman in March of 1984, he had other ideas.

Bob was living in Malibu around this time, and still very interested in exploring some musical alchemy with local musicians. I imagine the ride he’d been trying to get off since his early days as a would-be folk-rock messiah had a lot to do with that, trying to stretch himself as a player and a performer as the times were beginning to do some a-changin’ as the eighties began in earnest. Among some of the attendees at Bob’s house jams during this period was bassist Tony Marsico and drummer Charlie Quintana of the L.A punk band The Plugz, the first recognized Latino punk band active in a field of mostly white groups on that scene, and who in fact had gone indie during a time when that wasn’t really a thing yet, forming their own record label.  The alchemy Bob sought must have become adequately manifest by their gumption, but also their playing.

In short order along with punkily-monikered guitarist Justin Jesting (aka J.J Holiday) , they were to be Dylan’s backing group on the Letterman appearance. The performance would be both a triumph and a tragedy in equal measure.

With very minimal rehearsal, the band performed three songs; this one, another track from Infidels “License To Kill”, and an old (and unexpected!) Sonny Boy Williamson blues number “Don’t Start Me Talkin'” which may or may not be a reflection of the trademarked Bob Dylan poker-faced sense of humour, given that he wasn’t to be interviewed by Letterman on the show. Here, that song is pure Blonde On Blonde magic.

The performance of “Jokerman”was loose and funky too, probably having to do with the musical background of the players, seasoned by then on the L.A punk scene. It probably had something to do with the fact that the band didn’t know which numbers they’d be playing until taping started, too. That’s another Dylan signature move too, of course. On this particular night, this came with some consequences.

At one point, Dylan reaches for his harmonica, and it’s in the wrong key. There is some fumbling around to find the right one as the band plays. Finally, he gets the right one and the solo commences without a beat being lost, but with some odd air time with Dylan retreating away from the camera to find his instrument. You wouldn’t think this was a national TV appearance, but rather an informal club appearance. Perhaps even if the right harp had been proffered, this still would have been the case. Letterman asks Bob if they can come and play every Thursday night, and Bob smiles sheepishly and jokingly agrees. That’s how we all feel, watching this. Dylan and his guys were on.

As great as this Dylan appearance with the Plugz is, it’s kind of a tragedy too. The eighties was a rough period for Bob Dylan, a time when he seriously considered retiring. He was thought of as an act from another age, despite the slick production values that put his recent work well into the then-current production paradigm. Maybe that’s what helped to emphasize that effect of stylistic irrelevance. What would have happened if his eighties output sounded as good as it does here, full of ramshackle blues swagger meets spiky new wave feel? Who knows what direction things might have taken? We will never know. Looking on the bright side, at least this marvellous one-off appearance was recorded for posterity thanks to the Letterman show. As Keith Richards once said, the title of world’s greatest rock ‘n’ roll band doesn’t belong to a single act. It tends to move from band to band on any given night. I think on the night of March 22, 1984, it landed on these guys.

Since it’s broadcast, and lo, these many years later, Rolling Stone magazine has deemed it one of the best musical appearances on any Letterman show. That is saying something, given Letterman’s catholic tastes reflected in the musical guests he’s hosted in his 33-year stint as a late night talk show host. His show was instrumental in getting the most high profile talent like Bob Dylan to play on TV, but also and especially gave cult artists their deserved mainstream exposure. Warren Zevon and Robyn Hitchcock come immediately to mind. This also applied to young acts like REM who were working their way up by the early eighties, trying to gain career momentum in an age before the Internet. All of these were into the living rooms of millions thanks to the Letterman show. As such, this appearance really is a triumph ranked in with so many great appearances on the show by artists that represented the full range of musical talent in the late twentieth century, and well into the twenty-first.

After 33 years as a talk show host and as a key influencer when it came to music on mainstream TV, David Letterman is retiring. Be sure to watch his last show set to broadcast on May 20, 2015. We can only hope that someone like him, so open to all kinds of music performed on a mainstream program, will attempt to take his place. Of course, we’re probably in pretty good hands with Stephen Colbert taking over!

Bob Dylan continues his career as a world-travelling musician on a never-ending tour, still confounding his audiences and bands as to which songs he will perform on any given night and in what style. You can try to pin him down, and good luck to you on that, at bobdylan.com. Bob has a birthday coming up on May 24th, so there’s still time to send him a card! Look for a new Delete Bin piece about His Bobness coming up before the end of this month outlining another period of his career – the Gospel Bob period!

And for more on Bob’s performance with The Plugz, be sure to check out this excellent article by writer Lance Davis  that covers this performance of “Jokerman” as well as the other two songs performed on the Letterman show that night. Also, it includes footage of two additional songs that were taped before airing.

If that’s not enough, then check out this other excellent article that also discusses the performance, its aftermath which included a limited edition white-label five song bootleg, and more about the Plugz, too.