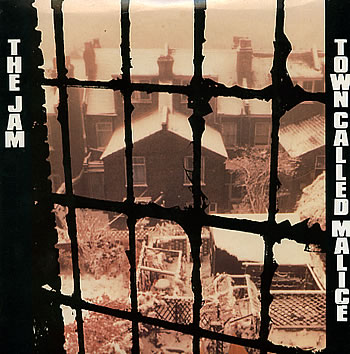 Listen to this track by Woking Surrey all mod cons power trio The Jam. It’s “Town Called Malice”, a smash single taken from 1982’s The Gift, their last record together. The song would be their third number one in Britain, and their first charting single in the United States. It would go on to grace soundtracks of movies for many years, including Billy Elliot, a story that is partly about life in a British town beset by economic woes.

The song is indeed a slice of life story of a town. In this case, it’s the hometown of the band, which is about forty minutes on the train outside of London. This is the suburbs, the same place in which another song, 1980’s “That’s Entertainment”, is set. But, instead of the youthful restlessness we saw in that tune, “Town Called Malice” reveals something more sinister underneath its similar scenes of suburban life, with something more at stake than youthful boredom and the need to break away.

Fortunately, too, there is also more hope in this song. Because the difference between that earlier song and this one is simply this; “Town Called Malice” is not about being restless, with scenes of feeding ducks in the park and wishing we were far away. It contains a call for change instead, which means taking the reins to ensure that one can “put some joy back in this town called malice.” But the challenge is not just the rows of empty milk floats and the “hundred lonely housewives clutching empty milk bottles to their hearts”. It’s the austere demands on them from on high to deal with all that, in keeping their lives normal by “cutting down on beer and kids’ new gear”. In this song, the powers that be make changes that leave gaping holes in the futures of the nation, and leave the burden of maintaining normalcy on families. This song is about the loss of expectation that reality will continue to support the vision the average person has always held about what life means in the country they call home. Is Britain still Britain without “Sunday roast beef” and other simple pleasures that make life worth living? That’s for the citizens of a town called Malice to work out for themselves, with no help from those who have removed that possibility from their lives.

This song could have been written yesterday.

Despite that, this song was written in the early 1980s, with head writer Paul Weller reflecting on his teenage years in the suburbs, which really weren’t all that long before this song was delivered. He was twenty-four the year this came out, developing from his teens into adulthood while making it his business to comment on his own life in Woking, and by extension on life in towns like Woking. It was certainly a good time to do that, as Margaret Thatcher’s consolidation of power resulted in a lot of misery for many families in the working class and even middle class in Britain at the time. That call to add joy was in direct opposition to the decisions being made about how life was being redefined in the House of Parliament.

Luckily, Weller and his bandmates injected some of that joy into this song to offset the starkness of the lyrics. This one is sparkling with soul-infused joie de vivre, connecting Weller’s hand at songwriting in the mod fashion which had always and definitively included American soul music into a rock context. Drummer Rick Buckler and bassist Bruce Foxton make that sound jump on this one, completely interlocked, and delivering parts that make this one of the most exciting singles The Jam ever laid down and put out.

Also, this was a song that indicated that Weller’s interests were veering away from the three-part guitar-bass-drums arrangements for which the band is known. Pretty soon, it would become apparent that the power trio with punk leanings sound which The Jam crafted and redefined for a generation of fans was reaching the end of its life. In this, Weller was pushing for change in another way, too; further away from Who-like power pop, and closer to the more nuanced world soul music. Pretty soon, a whole new direction would suggest itself to Weller after the even more soul-oriented “Beat Surrender” single, and The Jam would be no more. The Style Council would amp up the keyboard-based and horn-oriented arrangements, along with the Motown and Northern Soul feel, with a touch of jazz thrown in for good measure. Also, the political content in the songs was amped up, too, lashing out against the powers that be while also continuing to make impact on the charts.

Injecting joy into towns called malice became more like a call to their citizens to protest, not only in working class Britain, but also in Europe with a new internationalist vibe to match.

To learn more about Weller’s mindset around this time when The Jam was on its way out and The Style Council was on its way in , have a read of this interview with Paul Weller.

And there’s always paulweller.com to think about, too.