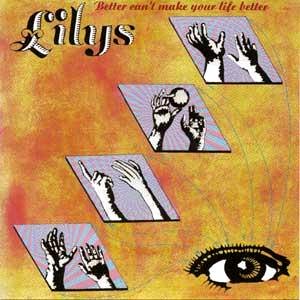 Listen to this track by supremely malleable musical concern from Washington D.C and now based in Massachusetts, Lilys. It’s “A Nanny In Manhattan”, a short and potent blast of out-of-time psychedelic pop as featured on 1996’s Better Can’t Make Your Life Better.

The success of this track was boosted by its use in a Levi’s jeans ad in the UK directed by Roman Coppola of all people. The ad exposed the band’s sound to a pretty big audience once it was re-released in 1998 after the ad had paved the way. The single reached #16 on the UK singles charts, which would be Lilys only top twenty showing. Not bad for a song that was meant to be a fill-in tune for what the advertisers wanted, that being something that sounded like the Small Faces without the royalty payment headaches.

Success in the UK top twenty was a long way away from where the band started. Well, I say band. I should say Lilys’ creative engine in sole principle Kurt Heasley and his rotating line-up of collaborators; over 72 members to date, according to Wikipedia. But, this above average (to say the least!) turnover wasn’t because he couldn’t keep a band together. So if  not that, than what was the deal with Lilys anyway?

There are certain advantages when your band has been together and largely, or even completely stable over the years in terms of membership. For songwriting and arrangements, you know where to place all of your pieces on the artistic board because you know what the other guy is going to do with his share of them. And then of course there’s the matter of iconography, myth, and brand building when it comes to bringing the band to market. But in the middle of all of that, perhaps you don’t have much insight as far as that which exists outside of your artistic comfort zone.

For Kurt Heasley, this is a scenario to be avoided. He does so by changing things up as often as possible. This certainly includes band members. But, it also has an effect on style too, with everyone he works with submitting their own unique contributions. In this case, it’s the very essence of mid-60s British Invasion and early psych sounds that he was after. And so here it is, with this song. It could be argued that this really is just a pastiche. But, if it is, it’s certainly a catchy one that pulls the ear along with it. To me, it’s like a concentrated capsule of that classic sound of the Byrds, the Monkees, the Kinks, transplanted from the time with which it is associated and into the mid-to-late 1990s, when many of these same sounds were being used to inform Brit-pop.

This may be the reason it did so well in the UK as a re-released single in 1998. Of course, the Levi’s commercial in which this song was featured didn’t hurt. It was as much a music video for this song as it was a vehicle to sell clothes, possibly more so. There are mixed opinions about this kind of thing in rock circles. But, to me, it’s all about getting music in front of people by any means necessary. Maybe for Heasley, this idea of turnover and a “by any means necessary” attitude in general are connected.  When you’ve worked with 72 musicians in your band, you’re clearly seeking something beyond yourself, and further, you have no problem leaving things behind, either.

Heasly was quoted on the matter:

“I love turnover in the band because some people can’t add to the student-teacher relationship. I need them to teach me what they want to do in the band so we can quickly move into that area. You always reach these incredible compromises, hopefully they’re democratic, but I guess they’re more like mono-monarchies. I guess it is democratic. You’re giving each person a stake in the law but I’ve always been the majority holder… (read the whole article)

It seems like a unique way to work. The teacher-student-teacher dynamic is certainly one that seems to rail against the standard rock ‘n’ roll ego, while taking advantage of the DNA that’s in the mix as music is being created. The results on this artistically and on the charts seemed to bear out its practicality when it came to this song.

To me, all this puts the territories of the solo act, the band act, and all that lies in between in perspective. Sure, it’s hard for a band to gain an identity when the members come and go with every record. Shifting styles from drone rock, to shoe gaze, to power pop also makes it hard to pin down who that band is. But, a solo artist doing the same thing doesn’t seem to incur any of these criticisms. It’s an interesting phenomenon to me as a listener.

But, maybe for someone like Kurt Heasley, it’s just business as usual, as long as he’s learning more about where the boundaries are, or if there actually are any boundaries in the end at all.

You can learn more about Lilys and Kurt Heasley by reading this interview in which he talks about the dynamics of using a band as an artistic flagship, rather than as a formal unit of musicians.