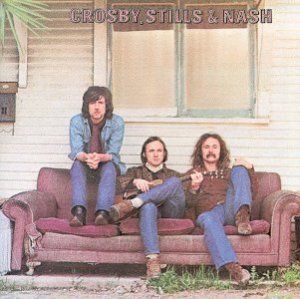 Listen to this track by three-part harmony supergroup CSN, or rather Crosby, Stills & Nash. It’s “Suite: Judy Blue Eyes”, and epic length slab of prime ’60s folk rock as taken from the then newly formed band on their self-titled debut record released in the spring of 1969.

The group formed after the three principles David Crosby late of the Byrds, Stephen Stills formerly of Buffalo Springfield, and ex-member of British Invasion favourites The Hollies, Graham Nash met at a party. Crosby and Stills had performed a tune together, and Nash who had been a part of a band who specialized in harmony singing joined in. And the magic happened! I’m sure even they were astounded at the results which have since been celebrated for nearly fifty years.

And this song was their flag in the sand as a statement that would distinguish them even from their work in the bands from which they had come. And along with that, they would usher in a new era for popular music, too. And how would they do that?

For one thing, and as this song illustrates very well, the writing on this album came from very personal places. In this case, the song is about the latter days of the relationship between the song’s author Stephen Stills and his girlfriend at the time, singer Judy Collins, she of the piercing blue eyes as celebrated in the title. Purportedly, he played the song in its entirety for her in demo form while the album was being recorded. Even during the break up period, she recognized that the song would immortalize their relationship in song, even if by then the relationship itself was over by the time she’d heard it. But, it’s since done more than even that.

First, it showed that rock music could deal in subtlety and with simple elements like vocal harmony and acoustic instrumentation to carry it, without any undue blues-riffing or extended jamming. Even as this song changes shape, being an actual suite of themes, it’s still a pop song, still with a goal of making its message plain to an audience. And that is the second point that also had a great deal of impact.

His relationship was coming to an end, and Stills wears his heart on his sleeve here – “I am lonely”, he sings, and also “can I tell it like it is?” That was an important statement at this time in songwriting history, coming out of an era where pop songs were perfectly constructed, but were not necessarily personal statements. And even if they were, they were hidden by artifice. This era is also known for psychedelia, where the imagery in songs were phantasmagorical, loaded with ecstatic visions and odd lyrical pairings, but with very few personal revelations as to where the writers were really coming from.

This song helped to change that, and open up the field for other writers with an ability to put across personal stories in their songs. And it also changed the idea that if you’re writing a break up song, it has to sound sad, or angry. This one is devastating. But, it’s also joyous and life affirming, full of interesting mood shifts, musical styles from folk rock, to choral music, to latin music, and with plenty of ruby-throated sparrows thrown in there for good measure.  So, personal stories and inner thoughts are presented with candour here. But, the song is not dour or self-pitying. As such it would become a benchmark of sorts for when the confessional style of songwriting became a highly sought-after approach by the coming decade of the 1970s.

The new trio CSN would of course go on to other great successes, even taking on a former Buffalo Springfield member Neil Young in time for an appearance at the Woodstock Festival in the summer of 1969. Their performance of this song would be a concert highlight, looked upon thereafter as a cultural document of the era.

After grand successes and periods where they went out of fashion, Crosby, Stills & Nash were inducted into the rock ‘n’ roll hall of fame in 1997, and into the songwriter’s hall of fame in 2009. These inductions  were as a band, and not including their solo work and their work with their previous bands. They are now looked upon as pioneers, not just in their formidable command of vocal arrangements, but also in their way of presenting male vulnerability, candour, and introspection into mainstream rock music.

You can learn more about CSN at crosbystillsnash.com