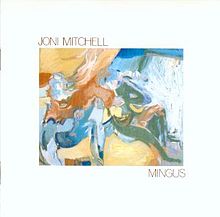 Listen to this track by jazz-enthusiast and singer songwriter Joni Mitchell. It’s “Goodbye Porkpie Hat” as taken from her 1979 LP Mingus named after her artistic patron at the time, the incomparable Charles Mingus.

This song is a jazz standard, first appearing in its original instrumental form on Mingus’ 1959 album Ah Um, and a tribute to saxophone legend Lester Young, the wearer of the signature headwear who died that year at the age of forty-nine.

Mitchell had veered into jazz territory on a number of albums previous to this one, working with several jazz musicians who were skilled enough to work within the framework of her penchant for open tunings. Despite its very experimental and non-commercial nature, the Mingus album still managed to peak in the top twenty on Billboard. This is possibly due to the fact that Mingus himself had died after contributing to six new songs on the album, plus two others from his existing portfolio, including this one. After a career of pushing the envelope musically speaking, this was his last musical pursuit.

Perhaps it’s fitting that “Goodbye Porkpie Hat” was the closer of this record, originally a tribute to one musician becoming something of a tribute to another years later, complete with lyrics by Mitchell especially for the project. But, I think this song evokes something else, too.

For one, it calls up the question of musical compatibility. Mingus was an experimenter, using intricate and non-traditional arrangements in mid-sized jazz bands in order to explore new territory. His music was not conventional by any stretch, and he was a notorious perfectionist, demanding much of his collaborators. He worked within the framework of jazz, but was not beholden to its movements or trends adding in any musical ingredient he felt necessary to realize his vision. So, how did Joni Mitchell, a Laurel Canyon singer-songwriter, get into his world?

Well, it should be remembered that Mitchell herself was not conventional either, writing songs using chord structures and tunings she’d designed herself, putting musicians through the paces when it came time to working out the parts. She too knew what she wanted when it came to making records, and arranging band material. Her interest in jazz as a form, and not as a musical ghetto, was proven on several of her records by this point as well, using jazz, but mixing it up with rock and folk to make her own sound, much like Mingus had done with gospel, orchestral music, and the blues in the 1950s. Mingus recognized this when he heard her music, and took steps to contact her about a collaboration.

These two musicians were birds of a feather, even if the musical worlds with which they are associated are not generally paired, and even if Mingus was too ill with ALS to play by the time they collaborated. As a tribute, Mitchell’s collaboration with Mingus provided him with a musically empathetic spirit as well as a musician with a prodigious and unique talent for lyrics, and for evoking stories, characters, and images. And that’s what we get here. This is a snapshot of a black and white New York City straight out of jazz mythology, and a world that had passed by 1979 even as Charles Mingus himself slipped away before the recording of the album was done.

So once again, this goodbye was for Mingus too, very much a part of that world which Mitchell evokes so well in this song, and the last of a breed.  This work then is not just a farewell tribute to a great composer, but also one dedicated to the world that he came out of, never to be revisited.