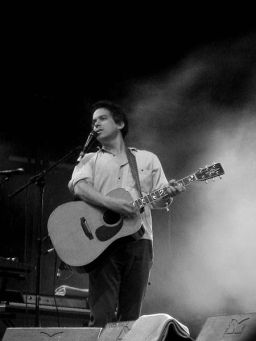 Listen to this track by singer-songwriter and serial musical collaborator direct from Portlandia M. Ward. It’s “Color of Water” as taken from his second album End Of Amnesia, released in 2001.

In addition to his solo career, M Ward has worked with a wide spectrum of talent in a support role including Conor Oberst, Norah Jones, Howie Gelb, Jenny Lewis, Neko Case, My Morning Jacket, and several more. This doesn’t include his duet with actor-singer Zooey Deschanel, that project simply called She & Him. He’s also a part of the Monsters of Folk supergroup. But, before all that came this tune, with a decidedly Youngian vibe about it that isn’t a million miles away from Shakey’s Harvest Moon era output.

But, Ward is a unique voice, hooking into the primal waters that many have dipped into although not always with the same level of brilliance. So, how does this tune showcase that?

This is certainly a song that takes its time, easing into the verse with a sumptuous acoustic guitar intro. The song evokes something of a restful porch-strum, even if it also adds in some interesting tin pan alley traces to go along with the overall folk-pop feel. M Ward’s vocal is little more than a whisper, as if singing someone to sleep, or more likely singing to them as they wake up. It certainly woke me up to how folk-rock didn’t have to mean stodgy classic rock fodder or anemic soft rock made for another generation. Here, I found that songwriting in this vein pre-dates even that, full of natural imagery that evokes the spirit of Romantic poets as much as it does Neil Young.

The sound that M. Ward hooks into here seemed like part of a movement in the early 2000s involving all of those aforementioned acts that he would subsequently collaborate with that made the old sound brand new, and made for my generation. A lot of the roots of where M. Wards’ music comes from I loved already or would come to love on their own terms. But along with falling in love with The Band around this time, this was a signal to my musical brain that disparate threads of old traditions were viable in a new and vital context, too.

The lyrical and warm nature of folk rock and country folk could be married to the understated shades of grey found in indie rock music, and the two really could live in harmony while still having enough of an edge to make it worth exploring, not just having on in the background.