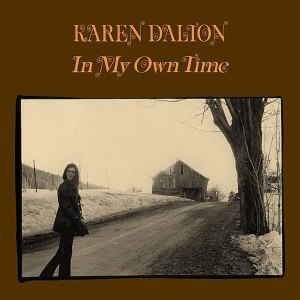 Listen to this track by East Village ’60s scenester and folk and folk-rock interpreter Karen Dalton. It’s “In My Own Dream”, a track as taken from her second, and last, album In My Own Time released in 1971.

That album title was apparently very apt for Dalton, who was never comfortable in a studio setting. In some ways, she was the polar opposite of all those artists who are creatures of the studio, trying to perfect a recording for posterity. Dalton wasn’t about posterity. She was about the performance in the moment, never to be repeated again. This proved to be pretty trying in the studio when she came to record, a place where multiple takes in order to find “the one” is the common goal.

But, what was clear was the power of her voice, a favourite on the scene when she traveled north from the sepia dust of Oklahoma, eventually to New York City like so many others. Where others were students of American folk traditions, reproducing their studied interpretations on the stages of Cafe Wha?, Gerde’s Folk City, The Gaslight, and many others, Dalton brought only her voice, her 12-string guitar, and her banjo. And that was more than enough. She was the real thing. No study necessary.

All of this made her a favourite of many, including Bob Dylan who wrote about her in his autobiography, Chronicles, Vol. 1. In it, he referenced her as a favourite singer, being able to sing “like Billie Holiday and play guitar like Jimmy Reed”. Others agreed on her level of talent, even if it would take a while before she would prove it to listeners on record. But, her masterful and unique interpretations of folk songs, and those of her contemporaries, Tim Hardin being one notable one, with whom she also performed, would distinguish her even during a time when writing one’s own material was becoming more and more important.

By the ’70s, and with the help of bassist and producer Harvey Brooks (Bob Dylan, Miles Davis), she followed up her rather informally realized debut record with this one, looked upon as being the more rounded recording of her two albums, with the very carefully planned sessions being held at Bearsville Studios in Woodstock. This song had some additional strength of talent, having been written by blues paragon Paul Butterfield. Other songs on the record would come from Richard Manuel (“In A Station”), Holland-Dozier-Holland (“How Sweet It Is To Be Loved By You”), and George Jones (“Take Me”). That’s quite a range of talent, and a lot of musical ground to cover.

This song is ignited by Dalton’s languid, old voice in a younger woman’s body delivery. You can hear why many people compared her to Billie Holiday, although to my ears, there’s a bit of Nina Simone in there, too. Apart from the quality of her voice, she knew how to use it as a supremely supple interpretive tool. Further to that, she casts any ideas of the sacred away when it comes to phrasing, delivering something more like a jazz approach than standard pop. Maybe this is why Dylan liked her singing so much; it was mercurial, never resting on a canonical interpretation, and playing by its own rules. Dylan certainly took notes on that score himself.

In My Own Time would be Dalton’s final statement as a recording artist, and not one that made much impact commercially speaking. As mentioned, she was never at home in the studio, where nailing down a completed version of a song chafed against her more open-ended approach to musical interpretation. She also wasn’t one to play the music business game, either. After the commercial failure of this record, and with her momentum as a recording artist lost, she gave up on a recording career, and died in 1993.

In 2007, a live album taken from a performance at a Colorado folk club in 1962 entitled Cotton Eye Joe would be released. And for the re-issue of In My Own Time, Devendra Banhart, who also was involved in Vashti Bunyan‘s return to recording, wrote the liner notes, along with notes by Nick Cave, and Lenny Kaye. Lucinda Williams, Joanna Newsom, and country singer Lacy J. Dalton who took her hero’s last name as her own and befriended her in the last years of the elder Dalton’s life, are also fans who took notes of her texture and feel for phrasing and unique enunciation.

The respect of her musical peers continues, even after her death, and even as most casual music fans have never heard her name.

You can learn more about Karen Dalton by reading this article about her courtesy of The Guardian.

4 thoughts on “Karen Dalton Sings “In My Own Dream””