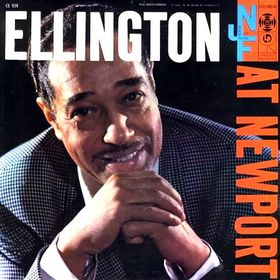 Listen to this track by great American composer and supreme jazz immortal Duke Ellington. It’s “Diminuendo” and “Crescendo in Blue”, two compositions dating back to 1937 and re-positioned here from the band’s book (aka their catalogue of songs) on the 1956 “live” release Ellington At Newport.

This was a game-changing date for Ellington and his guys, and I put the quotation marks around the word live because it was pieced together after the fact, supplemented  by studio recordings and with audience applause. Duke felt that the band wasn’t properly prepared for their appearance to the point that he felt it might not make for a good recording. He made the suggestion of a studio album and live album hybrid to paper over what he felt were some of the cracks. But, that’s not the big story here.

The big story is what happened to the real audience, and how it became a vital chapter in the career of one of the greatest American composers of all-time, actually ensuring his success for the remainder of his life – including a cover shot in Time Magazine.

Duke Ellington is now forever noted as being a towering genius in his field. Since he’d come out of smaller scenes in the 1920s and up through the Swing era of the 1930s, Ellington is credited with helping to define jazz and popular music in general in its earliest incarnations. But, by the 1950s, a lot of things had changed. The landscape of popular music had shifted. By the mid-to-late ’40s, jazz as music to dance to had become music to sit down and listen to, strictly speaking, designed for smaller clubs, and not the dance halls of previous decades. Those who did want to dance did so to jump blues bands and rhythm and blues acts. This is not even to speak of rock ‘n’ roll. The big band was looked upon as passe.

Duke and his band were operating on royalties, and playing ice skating shows as backing music. It’s hard to imagine.

But, the Newport Jazz Festival would help him find a fresh audience, being something of an innovation removed from the cramped New York be-bop clubs and faded dance halls of times past. It was make or break time! Ellington even composed a suite for the occasion, including the pieces “Festival Junction”, “Blues To Be There” and, overtly, “Newport Up”. Ellington knew how important this show was. But, that suite would not be the star of it. With the help of soloist Paul Gonsalves on tenor saxophone connecting the two pieces together, it would be “Diminuendo” and “Crescendo in Blue”.

Up until then, the show had been a bit lifeless, with many in the audience heading for the doors. It must have seemed like a physical manifestation of how Ellington’s career had been perceived by 1956; past his prime, playing out of date music. But, when Gonsalves started in on his solo to tie these two pieces together, something magical happened; a woman got up from her seat, dressed in her finery to suit the posh Newport setting, and began to dance. The rest of the crowd began to take notice. Even Duke took notice, and how could he not? A beautiful platinum blonde throwing polite festival crowd convention to the wind, and responding not with a critic’s ear, but rather with her whole body.

Then, the enthusiasm and even pandemonium spread through the audience, as Gonsalves played his heart out for a monumental twenty-seven choruses, taking Ellington’s instruction to “blow as long as you feel like” very literally. Soon, the whole place was up and dancing, with the show pressing on well past the allotted time and being secured as a high point in jazz for the ages. And as for Duke Ellington and his band, they secured themselves for the rest of their existence, at least until Ellington’s death in 1974.

The irony of course is that jazz had largely become a critic’s form, even a musician’s form. The idea of dancing to it seemed grievously old-fashioned in that context. But, sometimes the physical is bigger than convention, than what is down on paper, than what is accepted as a singular direction for an art form. Sometimes, you just gotta forget all of that get up from your seat, and dance. This put everything about jazz, and about music in general, into perspective; that art and expression isn’t a linear thing. It can’t be fully accounted for by critics, or by bloggers for that matter.

That’s why we love it; it sums up our lives, but it is a mystery too.

For more information about this historic show, read this article.