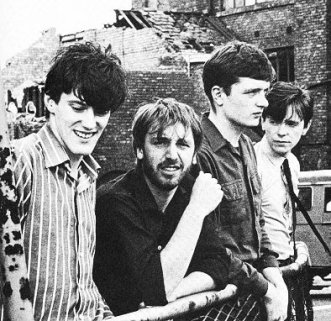 Listen to this track by Mancunian post-punk trendsetters Joy Division. It’s “Transmission”, a single released in October of 1979 between their two sole albums as a seven inch on the Factory label. By the next year in December, it would be re-released as a twelve inch single, later to be celebrated in cover versions by bands from Low to Smashing Pumpkins, to Hot Chip.

By this time, the band had morphed from what they would describe themselves as an “undistinguished punk band” called Warsaw into one that would write a template for bands up until the present day. This would be a highlight in a small but vital body of work, cut short by the death of lead singer and lyricist Ian Curtis, himself something of an iconic figure for post-punk influenced acts, and certainly for frontmen looking beyond the standard shrill-voiced golden god variety.

Actually, this band would provide an example to succeeding ones in many ways beyond even that. They broke the rules of being a rock band. But more importantly, they wrote their own.

One way was in their approach to rearranging the standard guitar, bass, drums dynamic, which was according to the preferences and styles of each player, rather than the players conforming to pre-existing roles set by other bands. For instance, they made the bass into a lead melodic instrument, in line with the way Peter Hook preferred to play it – high up on the neck while slinging the bass down low, playing melody lines while also being the chief rhythmic anchor to the whole band. Guitarist Bernard Sumner approached his parts in a similarly melodic way, particularly on this track. But, generally speaking, his approach to playing guitar was about texture and rhythm, not leads. Drummer Stephen Morris was not the timekeeper in this band. He simply added very effective accents to what Hook was laying down, while each piece of his kit augmented Sumner’s textural parts at the same time. For another stark example of this that might illistrate their dynamics even better, see also “She’s Lost Control”

And of course we get back to Ian Curtis, who as mentioned was an unconventional frontman, inventing a whole stream of rock singing and presentation by himself. But, he also repositioned rock lyric writing. Curtis’ material is full of psychological angles and stark black and white imagery that is open to interpretation, allowing the listener to imprint their own experiences and ideas onto them.

“Transmission” is a great example of this, not forgetting the hooks in those lyrics either: “dance, dance, dance, dance, dance, to the radio!” What does that mean? Is it a revolutionary call to action? Is it a celebratory anthem to let loose by? Is it an ironic statement about being complicit in ones own oppression, falling in with the rhythms of those in charge of the transmissions in our culture? It could mean all of those, or none. Interpretation of this tune depends on who’s listening, and in what state of mind they’re in at the time. If they took anything away from the punk rock band they’d been, it was this; involve the audience.

In May of 1980, Ian Curtis committed suicide. With one side of their self-contained unit gone, the rest of the band folded, later to re-define themselves as New Order. But, while he was creating his art, Curtis too contributed significantly to what made Joy Division a bridge not only into the 1980s, with new wave and with what would become known as alternative rock. But, it would also provide a template for how many, many bands approach their craft to this very day, from Interpol, to Arcade Fire, to TV On The Radio.

That’s quite a legacy.

Learn more about Joy Division, and about their landmark album Unknown Pleasures, by reading this article about both on the NME.