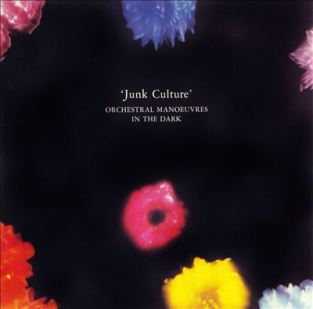 Listen to this track by synth-pop purveyors and technologically minded quartet from the Wirral in the northwest of England Orchestral Manoeuvers In The Dark, aka OMD. It’s “Tesla Girls”, a single as taken from their 1984 LP Junk Culture.

The album was the follow-up to Dazzle Ships, which had served to be something of a dip in their fortunes chartwise the year previous, a record that’s now celebrated as being ahead of its time, even if it was misunderstood by critics upon release.  It could be that their work had drifted into darker political themes and more experimental textures that perhaps didn’t play as well on the radio by 1983.

This song was a definite move in a more pop direction after the more avant garde approach of Dazzle Ships.This single was the third salvo from Junk Culture as a whole after “Locomotion” and “Talking Loud and Clear”.  And what a bright and chirpy song this is, although as usual the lyrics of this song make it angular and distant for contrast, and somewhat mysterious too. And to that point, who are the Tesla Girls of this song, anyway?

In the interim between the release of Dazzle Ships and the recording of Junk Culture, the band updated their rig to include an array of samplers, and the latest and the soon-to-be-ubiquitous Fairlight CMI synthesizer. That stress on making each album a push into new territory while keeping the audience engaged was as difficult then as ever from a band who’d always strived to do that, particularly because so much of their sound was rooted in emerging technology. The ebullient pop sheen of the follow up typified in “Tesla Girls” was their way to redress the tonal balance, and to fatten up their more spare and Kraftwerkian sound on their previous records.

Of course a developed sound is one thing, and compelling songs is quite another. Luckily, principle songwriters Andy McClusky and Paul Humphreys know how to construct a pop song, and to add layers of meaning to it that give the whole thing a sense of depth beyond the technological framework in which it’s presented. That’s what really sells this song, even thirty years (dammit!) after it was released.

So, back to the original question: who are the Tesla Girls? Are they the legacy of inventor and electro-magneticism specialist Nikola Tesla, the Serbian-American who basically invented wireless technology and innovated in the fields of electrical current and mechanical engineering? In this, Tesla’s Girls – electrical engines, radio transmission technology, RADAR, and a myriad of other inventions –  changed the world. Modern pop music itself is one of Tesla’s Girls, reliant as it’s been on innovative technology from radio broadcasting, to the development of microphones and recording technology, to electric amplification. 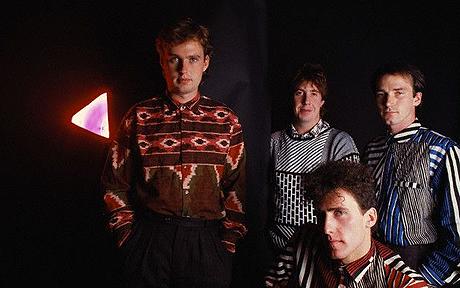 But, maybe this song is about that human energy which drives those inventions, that “can’t keep still or settle down”. Perhaps it refers to creative energy that never stops jumping around in one’s head, kind of like deeply felt emotions. That leads to another interpretation of what Tesla Girls might be; the mysterious nature of magnetic attraction as it pertains to human beings falling in love or in lust with each other for reasons that can’t be fully explained. I like to think this song is about all of that at once, during a period in history when technology was as frightening as it was fascinating. As it happens, this duality had been the band’s stock in trade since they began. They continue that here, and manage to give it a heart, too.

OMD would go on to even greater heights with their song “If You Leave”, certainly their biggest hit in North America, and practically an anthem to a whole era when it appeared in the John Hughes-penned film Pretty In Pink. To boot, they’d inform a whole new crop of bands well beyond the ’80s, from Moby, to Radiohead, to The Xx. And after a span of years that saw them break up, actually leaving singer Andy McClusky as the sole member, Paul Humphreys and McClusky are steering the OMD ship today, along with classic line-up members Martin Cooper and Malcolm Holmes.

You can learn more about them, and their most recent album English Electronic at OMD.uk,com.