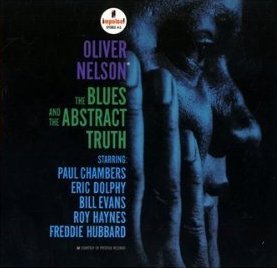 Listen to this track by jazz saxphonist, arranger, and latter day TV soundtrack composer Oliver Nelson. It’s “Stolen Moments”, an established jazz standard covered by many since, and the centerpiece to his celebrated 1961 album The Blues And The Abstract Truth.

Nelson is joined on this song by a selection of some of the greatest musicians in jazz at the time; Paul Chambers on bass, Roy Haynes on drums, Eric Dolphy on flute, Freddie Hubbard on trumpet, and Bill Evans on piano. Nelson’s septet is rounded out by George Barrow, who holds down the low end on baritone sax, even if he doesn’t take a solo. With this tune, it’s the voices of the horns working together to bring out the harmonic beauty found in the theme of the song that makes it such a work of note.

Much in the same way horns would be tightly arranged later in the decade on significant jazz releases like Lee Morgan’s “The Sidewinder”, and Horace Silver’s “Song For My Father”, the horns here on this piece are interlocked in the same way they are on a lot of R&B tunes. Perhaps this sheds some light on where Nelson had come from as a musician, and perhaps pointed to where he was going, too.

Having worked with jump blues kngpin Louis Jordan and early soul-jazz pioneer Wild Bill Davis, and having served for a time as house arranger for The Apollo Theatre, Oliver Nelson treated R&B and jazz as a part of a musical continuum, proceeding to compose in that light on his own sides. Even the title of this now-legendary album belies this tendency, with the blues being the common tie that binds. Musically speaking, this song is something of a sophisticated variation on the blues, with minor modes and augmented scales adding rich texture and backdrop to lyrical and laid back soloing that rises above the expectations of what the blues is, or can be.

But, what I love most about it is its emphasis on mood, and its noirish feel that captures the imagination. It sounds like an exercise in musical storytelling, more so than just a theme bound together by solos. But, what solos! Each one is a study in pureness of tone, and in lazily exploratory abandon, with each passage tracing what sounds like a drowsy walk in a nocturnal landscape. And that’s what raises this above just the sum of its parts; it suggests a time and place, a location where a drama can unfold.

Besides how well the piece uses the horns as an almost choral texture, it’s this feel that there are characters who could be conjured by the music, moving to and fro in the night, using their stolen moments for good or ill. And maybe that’s why Nelson would do so well as a soundtrack composer for television, a career move he’d make by 1967, when he moved to Los Angeles. Music for TV shows Ironside, Columbo, and The Six Million-Dollar Man would all benefit from Oliver Nelson’s keen ear for arrangement from the late ’60s to the mid ’70s. He would continue to arrange for artists of a wide variety of genres, including jazz, but also for soul and pop acts as well.

Nelson’s career and life would be cut short by a sudden heart attack in October of 1975. But, this tune would live on in many, many versions, from Ahmad Jamal to Frank Zappa.

You can learn more about Oliver Nelson here on his All About Jazz entry.