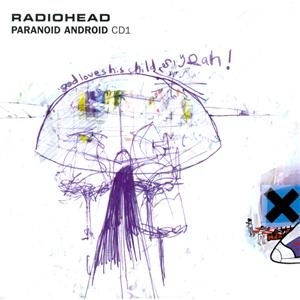 Listen to this track by game-changing rock quintet from Oxford, Radiohead. It’s “Paranoid Android”, their epic-scale and time and tempo shifting song as taken from 1997’s OK Computer.

The band had its work cut out for it after having put out their preceding record, The Bends. That album had them finally finding their voice after a debut that showed promise, if not polish. The trick with following up an identity-solidifying record is that there’s not a lot of room left to go, other than reproducing it for that difficult third album. But instead of playing it safe and making The Bends 2, Radiohead did one better with OK Computer. In addition to sounding as cohesive as its predecessor,  it served as a post-Brit pop statement that stood as something of a challenge to their peers.

And “Paranoid Android” helped to lead the way into a sound that fit with that sound they’d established, and yet showed something of an evolution, too. This is something of an irony when you consider the sources of musical inspiration that helped to shape it.

At over six and a half minutes, “Paranoid Android” made for an unlikely single for its running time alone. But, that was only the beginning of the risks it stood for after a period of time when old-style three and four minute singles were the norm once again, hearkening back to the 1960s British Invasion period. Yet, this song is old-school in its own way, even as it sounded like a leap forward in terms of chart music.

You could be forgiven for thinking that this was a return to a proggy yesteryear, with time signature experiments and tempo shifts that give the song the impression of being a suite, rather than a pop single. The words “Pink” and “Floyd” were used an awful lot by many a critic. But, the Pixies had as much to do with its arrangement as Pink Floyd did, or indeed Queen’s “Bohemian Rhapsody”, which was a common-if-erroneous comparison at the time. There were a lot of references that could be gleaned from an initial listen of this song. But, somehow, it also seemed like something entirely new at the same time. It sounded like a paradigm shift.

The band were interested in taking disparate elements represented by song fragments they had laying around, and seeing what could be made of them. In some ways, this runs contrary to how the track was perceived by many when it reached the top ten in Britain, and doing so without a lot of traditional radio support, perhaps for obvious reasons. There was a lot of talk about Radiohead making an attempt at classic rock. They certainly and very deliberately referenced the Beatles “Happiness Is A Warm Gun” on this track, with The White Album serving as fuel for the whole album (check out the “Sexy Sadie” reference on “Karma Police, for instance). But, that song was made from fragments, too.

None of this was an act of po-faced earnestness on the band’s part to make a grand statement of high-brow musical art to be compared with those well-established musical roots. Instead, Radiohead decided that they would lean into the perception that this is how many critics viewed them anyway, and craft the song accordingly. Even the title “Paranoid Android”, referencing Douglas Adams’ depressed artificial lifeform with a gloomy outlook from The Hitchhiker’s Guide To The Galaxy series of books, was meant to be a parody of how singer Thom Yorke was written about at the time; a bit mopey, pessimistic, and without humour. The line about “… from a great height”, as in “being shat upon from …” takes on new meaning with this in mind, “rain” notwithstanding.

And ultimately, the song’s seemingly humourless tone is exactly the opposite. This is a band poking holes in their own image, making fun of their own pop music avatars as portrayed in the press in a very unexpected way; by embodying them. The fact that it is one of their most compelling tracks, filled with an almost classical delicacy that is balanced against some of the most ferocious sounds they’ve ever laid down is a by-product of a group of artists letting go of what was expected of them. What was left was pure musicality, along with themes they would continue to explore on this album, and on succeeding ones; the nature of consciousness, the mind, and the illusory and Machiavellian nature of modern political machinery.

Basically when it came to “Paranoid Android”, they went for it. And it panned out, helping them to establish a way of working that would open all kinds of creative doors for them. This song helped to set them on a course that would have them follow their artistic instincts, which they would do once again and in an unexpected direction when they followed up yet another hit album after OK Computer. Amazingly, that record would change the game again.

Radiohead continue to craft interesting and challenging music today. You can find out about what they’re up to at radiohead.com.

And for more on this song, check out this YouTube mash-up of Radiohead’s “Paranoid Android”, constructed of clip as recorded by musician fans of the song. It is a work of editing brilliance, of course. But, it also shows the kind of stylistic and cultural reach the song continues to have.

For further Radiohead news at the time of this writing, check out this communique from the NME about a new Radiohead album on the books to be at the recording stage in the Fall of 2014.